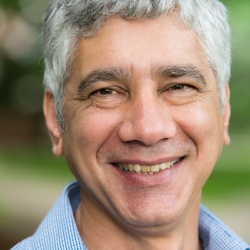 Samuel Cruz specializes in Latin American visual cultures and cultural studies. His research interests involve the relationship between film and urban areas, and more specifically, how contemporary films discuss socio-political, economic, and cultural issues in Latin America in the wake of major urban renovations that take place in the context of larger neoliberal reforms. He is also interested in cities and how different actors, like globalization, affect them.

Cruz teaches Spanish and Portuguese language courses as well as a variety of courses in the literature and cultures of the Spanish-speaking and Lusophone world. In 2018, he recieved the Edward G. Harness Outstanding Educator award. He is the director of the Latin American Studies program, advisor for Gamma Phi, the National Collegiate Spanish Honor Society, and advisor for Marietta College's Spanish Club.