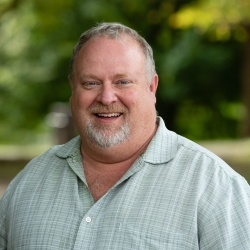 Scott joined his first working band at age 15 and has been gigging in all sorts of venues for almost 40 years. From the variety of the “Mel Tones” to the intimacy of a jazz trio, Scott has logged many gigs behind his kit. Taking his love of music to college, he graduated with a music teaching degree and began teaching mostly band. A quick break from teaching in 2004 took him all over the Mediterranean on a four-month tour with Royal  Caribbean. After that, he came home renewed to teach and began his second stint as a classroom teacher. He continues to play R & B in “Hip Pocket”, Jazz with several Jazz Trios, and recently started his own ballroom dance band for the local dance clubs. He is a regular with the River City Symphony Orchestra and is called upon, on a nearly weekly basis, to add his own touch to just about every kind of ensemble in the Mid Ohio Valley. He has a successful percussion studio and has guided many students down the path of performing and teaching. In early 2001, he coached his second national winner in the annual MTNA competition, and has had some of the finest young marimba players in the country studying with him.