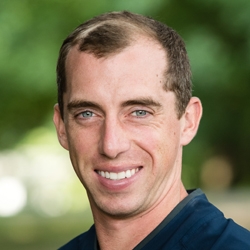 Shawn Runyon joined Marietta College in the Fall of 2017 to serve as the head men's lacrosse coach. After fielding a varsity lacrosse team from 1990-2002, the Pioneers began play again during the 2018-19 school year.

Runyon comes to Marietta after two years as an assistant coach at Gettysburg College, an NCAA Division III member of the Centennial Conference. His primary responsibilities with the Bullets included serving as the offensive and recruiting coordinator as well as an assistant strength and conditioning coach.

In his first season coaching at Gettysburg, Runyon helped the Bullets claim their second-straight Centennial Conference title. Gettysburg advanced to the NCAA Division III Championship semifinals and finished with a record of 17-3 and were ranked No. 5 nationally. During his final season with the Bullets, they went 11-6 and finished with a No. 17 national ranking.

Four of Runyon’s players earned All-America honors in his two seasons at Gettysburg. In addition, he coached eight all-conference players including the 2016 Offensive Player of the Year.

Prior to Gettysburg, Runyon spent two years as the offensive and recruiting coordinator at Frostburg State University, an NCAA Division III member of the Capital Athletic Conference. The Bobcats were 30-9 in those two seasons, including a 16-3 mark and No. 17 national ranking in 2015.

Runyon began his coaching career as the offensive and recruiting coordinator at Springfield College, an NCAA Division III member of the New England Women’s and Men’s Athletic Conference, for two years. The Pride won back-to-back conference titles and earned a No. 12 national ranking in 2012.

Runyon competed collegiately at Springfield College where he was a two-time all-conference selection. He helped the Pride capture four consecutive conference titles as he finished with 100 career points. Runyon served as a team captain his senior season and earned Honorable Mention All-American recognition as well as being selected to participate in the USILA North-South All-State Game.

Runyon received a Bachelor of Science degree in Movement and Sports Studies from Springfield College in 2011. He is currently completing a master of Education in Physical Education through Springfield.