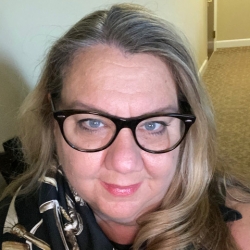 Susan "Jay" Hauck has been a member of the Marietta College Alumni Association since 2018 and is currently its Chair.  She is a New York City native who graduated with a Bachelor of Arts from MC with a double major in Public Relations and Broadcast Management. On campus, she was very active with the campus radio and TV station, was a member Sigma Sigma Sigma sorority and served with the Student Body Executive Board.

After graduating she moved back to the New York area and began a 35-year long retail career that included roles with Tiffany & Co, Jaeger International and Apple Computer. At Apple, she was hired to help launch their new retail division relocating to the west coast. As an Apple Market Leader for more than 10 years, she was responsible for one of the largest markets in the U.S. that represented an annual revenue of more than $750 million.

She led store build outs, staffing and business development throughout the Pacific Northwest. After retiring from Apple, she and her husband launched a creative company, Integrated, where they consult for Fortune 100 companies going through brand launches and relaunches. She specifically focuses on programs that include change management, leadership development, succession planning and corporate resilience training.

In May 2021, they temporarily moved from Seattle, Washington, where she was a volunteer with the Seattle Junior League and Seattle Symphony, to the Pearl District in San Antonio, Texas.  She and her husband Jason often travel to Europe, she loves photography and is working on a specialty cookbook.