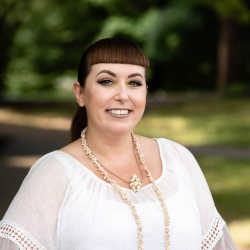 Erin Zerbe-Comer, who goes by "Z," is an award winning interdisciplinary artist and educator working in illustration, digital art and mixed media. Her work specializes in human emotions and relationships between the body and spirituality, tackling issues of gender, grief, and the metaphysical. Z has exhibited her work widely both nationally and internationally; showing alongside artists such as Yoko Ono, Shirin Neshat, and Sebastiao Salgado.

In 2021, Z was awarded the John G. and Jeanne B. McCoy Teaching Excellence Professorship, which recognizes teaching excellence among Marietta College faculty. Z's most recent work is focused on exploring grief and addiction through mixed media and graphic memoir.

When she is not making work in her studio or teaching classes at Hermann Fine Arts Center, Z loves spending time with her husband and three cats. Z is avid horror movie fan, sci-fi nerd, makeup-aficionado, and a self-proclaimed crazy cat lady.

Learn more about Z and her work at http://www.erinzerbecomer.com.