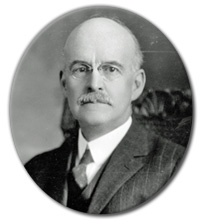 When Robert Lincoln Kelly accepted the Board of Trustees' invitation in February 1919 to become the Marietta's eighth president, the College began printing its annual academic catalog announcing the new leader.

But by fall, as the publications hit campus, it was the inauguration of Edward Smith Parsons that the campus was raving about.

In February 1919, Dr. Kelly, who was then the executive secretary of both the Association of American Colleges and the Council of Church Boards of Education, was offered the position of president. A few weeks after accepting the position, Kelly told the Board he had changed his mind. Dr. Parsons had previously been on the short list for the presidency and accepted the post as the College's leader.

At his inauguration ceremony, Gen. Charles G. Dawes, Class of 1884 (later the Vice President of the United States), spoke of Dr. Parsons, who was also a practicing Congregational minister.

"It was with great satisfaction that as I listened to the new president of Marietta College this afternoon I could feel that I was listening to a man who kept his feet on the ground, a man of clear vision, of clear thought and clarity of expression, a man who appealed to reason and to the higher instincts of his fellow men in a time when, unfortunately, at least in the politics of our country, there was never less of that sort of thing emanating from the rostrums of the United States," Gates said.

During the 17 years that Dr. Parsons was president, the country underwent a tremendous amount of change. When he arrived at Marietta, Prohibition was enacted, followed shortly thereafter by the ratification of the 19th Amendment giving women the right to vote and the Roaring 20s. The decade slammed shut with the stock market crash of 1929, giving rise to the Great Depression.

But through all these social, economic and governmental changes, Dr. Parsons was able to grow Marietta College, defend against the fate that many other small colleges suffered during the Depression and create a memorable 100th anniversary celebration in the spring of 1935.

All areas of Marietta College benefited during his tenure. Financially, the Alumni Association established the Marietta Fund in 1923 and the College embarked on a lofty $2 million Centennial Campaign in 1929. Though that goal was not reached, the endowment grew by 215 percent during Dr. Parsons' time.

One of Dr. Parsons' goals was to ensure that athletics at the College remain amateur, rather than professional. In 1926, Marietta was admitted to the Ohio Conference and, in 1929, Ban Johnson Field House opened. Also during his tenure, Ban Johnson Field House, named in honor of major donor and 1887 alumnus Byron Banfield Johnson, the founder of the professional baseball’s American League.

In 1919, student enrollment was 267. By the time Parsons retired, there were 390 students attending Marietta. With a third of the student population comprised of women, it was necessary for the College at that time increase women's housing and to create a Dean of Women, a post that was first held by Elsie Eaton Newton in 1924. The work the College put in to create a stable coeducational environment led to its being recognized by the American Association of University Women in 1931.

Tuition remission for the children of faculty who wanted to attend Marietta became an incentive during Parsons' administration and faculty sabbaticals were also implemented, though not widely used until after World War II ended.

Closing a successful centennial celebration was the May Commencement Ceremony, which provided another lasting memory of the president who students called "Prexy." After the honorary degrees were conferred to guests such as William Augustus Bosworth, Class of 1864, the oldest surviving alumnus, Dr. Parsons asked the newly hooded Bosworth to provide the benediction. "To his evident surprise, Dean Draper T. Schoonover presented him for the honorary degree of Doctor of Laws," wrote McGrew, the College's historian and author of "…In the various branches of useful knowledge." "The degree was conferred on the amazed Dr. Parsons by Thomas J. Summers of the Board of Trustees."

A year later, Parsons retired as President Emeritus and wrote a heartfelt letter to the student body saying, among other things, that he would take every edition of The Mariettana that was published during his time at Marietta. "I shall turn the pages often and look into your faces as they show on the printed pages. And I shall rejoice in what you are doing to help this old world along to better days."