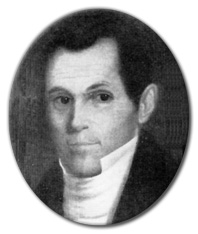 In February 1835, as the Marietta Collegiate Institute and Western Teachers' Seminary was granted a new charter to confer degrees, thus changing the name of the institute to Marietta College, its founders and instructors began the search for the College's first president.

By that spring, the first trustees of the College identified a Congregationalist minister from Park Street Church in Boston and former attorney as their choice for Marietta College's pioneering president.

The Rev. Dr. Joel Harvey Linsley was one of eight children born to New York judge, the Hon. Joel Linsley and Levina Gilbert. A graduate of Middlebury College, he studied and practiced law during the first seven years of his professional life, though his passion for ministry became too great to resist. By 1822, Linsley, having resumed his religious studies, was ordained and began his first role as church leader at the South Congregational Church in Hartford, Conn., in 1824. When the trustees at Marietta College sought him out, he was the leading the Boston church.

When Linsley began his work at Marietta College, he was part of the five-member faculty and was in charge of the Department of Moral and Intellectual Philosophy, in addition to his fund-raising duties. For several months, he served as the minister of Marietta's First Congregational Church, after the Rev. Luther Bingham—founder of the Marietta Collegiate Institute—had been dismissed from service.

By the fall of 1835—just a few months after he began his time in office—the College had purchased Foster Square, the plot of land between Fifth and Sixth streets south of Wooster Street.

During the 1845 Commencement, the cornerstone of the campus' second building was laid and Linsley, along with the Hon. Lewis Cass of Michigan and Mariettan Nahum Ward gave addresses during the ceremony. A year later, Linsley resigned his post at Marietta College's first president. By the end of 1846, he had taken the position as minister of the Second Congregational Church in Greenwich, Conn., where he spent the rest of his life.

The Marietta Register published an obituary announcing his death on March 22, 1868, and included commentary about his time at Marietta College: "As President of the College, he was active and faithful, devoting himself unspairingly [sic] to the interests of the Institution, winning the respect of his associates, and the love of his pupils."