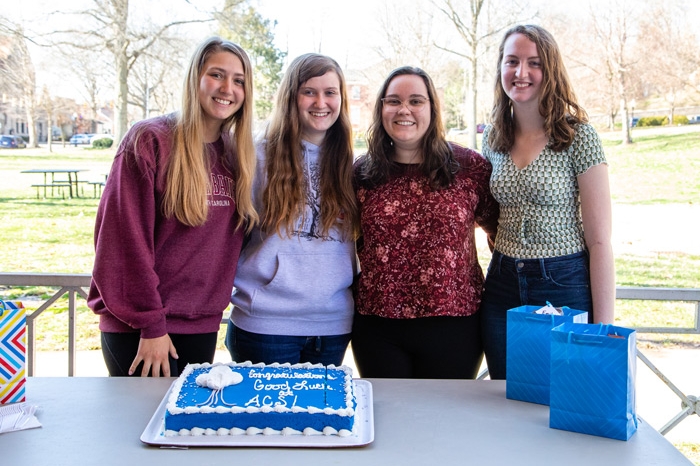 The Chemistry Department celebrated its own special send-off for four students who will present during next week’s American Chemical Society’s national meeting in San Diego.

“This is a culmination of multi-year research projects that each student has worked on, and is a significant accomplishment for each of them,” said Dr. Kevin Pate, McCoy Professor of Chemistry and Chair of the Chemistry Department.

Millheim, who is majoring in Chemistry, is presenting research on the investigation of the proton transfer mechanism in fluorescence quenching. Her research advisor is Professor Debbie Egolf.

“I’ve been working with her since, I think, her freshman year,” Egolf said. “Things slowed down during COVID, but even then, she tried to continue her research.”

The students will leave Marietta on Sunday and return on Wednesday.

“This will be my first time presenting at ACS,” Millheim said. “It’s a little overwhelming but I also feel really grateful that Marietta College is the reason I’ve been able to do this at such a young age.”

McCoy Professor Suzanne Parsons is the research advisor for Schlanz and Kinney.

“Our students are very well prepared,” Parsons said. “We get them started as freshmen, teach them how to research, and they take it from there. They usually only come to me when something is broken or they need to buy something. It’s really impressive to be able to send them off to grad school or med school and know that they’ll be just fine.”

Schlanz is presenting her research on the effects of mononitroparaben on melanoma cell growth.

“I’m very excited because it’s a great opportunity to present my work at such a large conference, and also I get to see other people’s work,” Schlanz said.

She has opportunities to conduct research this summer, however, Schlanz hasn’t selected which program she will pursue. Her parents are also excited about the conference and what she has accomplished so far. She is the only junior from Marietta presenting at the ACS conference.

“My parents really support me and what I’m doing,” Schlanz said.

Kinney, a Biochemistry and Mathematics double major, is presenting her research on the effect of heptyl paraben on melanoma cells, which she has pursued since her sophomore year.

“(Dr. Parsons) has put a lot of work into helping me with my abstract, and over the years she has really helped with my lab technique. That’s meant a lot to me and has helped me so much with my ability to do research,” Kinney said. “My parents are also pretty excited for me.”

Emma Christman ’23 is a Biochemistry and Adolescent Young Adult Education double major who will present virtually at the conference. Her research focuses on using copper nanoparticles as a catalyst for the decomposition of hydrogen peroxide.

“This can be used for classroom demonstrations,” Christman said. “What got me interested in doing this research is that I really wanted to find what would incorporate my two majors and also help design something that other teachers could use in their classrooms.”

Professor Jim Jeitler is Christman’s research advisor, and they conducted a summer research project to start her on this path.

Jeitler had high praise for Christman, as well as the other three student researchers.

“She’s a woman teaching in a hard science, and she wants to be able to use this in her own classroom,” said Dr. Jim Jeitler, her research advisor.

“We’re sending four women to this conference to present their own research,” Jeitler said. “Two of them are doing physical chemistry projects, which in the past was typically something women have been discouraged to do — so this is something very special.”