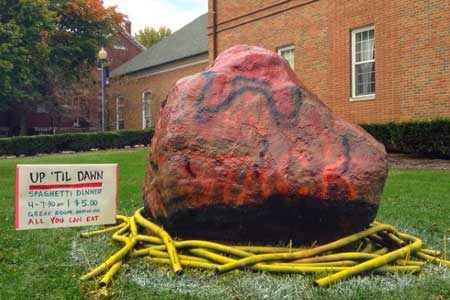 When you mention "The Rock" at Marietta College, it's not a reference to Alcatraz, but instead to a large boulder that occupies a very special place on campus and in the hearts of student organizations and their members.

The concept of "The Rock" actually began with McDonough's first dean, Steve Schwartz. He wondered just how much students might enjoy finding something to paint and decorate as an outlet for expression and to encourage activism.

While that conversation was going on, two Marietta College students, Megan Staley and Andrea Nay, discovered "The Rock" during a downtown visit in the Spring of 1999.

After spying what appeared to be a huge boulder unearthed during the demolition of the old bridge across the Muskingum lying adjacent to the Harmar Footbridge, the excited duo immediately informed Dean Schwartz who, in turn, enlisted Dave Lane of the Physical Plant to rescue "The Rock."

With the approval of the Becky Thatcher's ownership and the City of Marietta, it was transported to campus by forklift. The apparent geological formation that had once served as a footing for the old bridge attracted immediate attention. While it was quickly determined that the "The Rock" was actually cement, the geological origins of the formation ultimately proved unimportant.

Christened by the Class of 1999, it was adorned in Navy Blue and White in time for Senior Week that spring.

By fall, students had come to enjoy the nightly transformations of "The Rock" emblazoned with everything from rallying cries for Pioneer athletes, recognition for Greek pledge classes and pleas for social justice to birthdays and Commencement congratulations.

Dean Schwartz so enjoyed seeing what changes had taken place overnight that he began every day at McDonough by snapping a picture of "The Rock's" new dressing or message and he collected them into a matriculation poster for 2002.