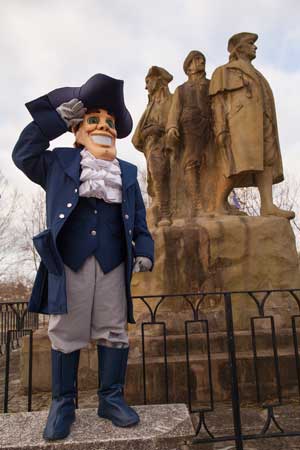 One of the most common references to the origin of the College's nickname, "Pioneers," comes in the pages of Vernon E. "Dan" McGrew's " In the Various Branches of Useful Knowledge." This history of the College points to an appearance of the name "Pioneers" in the fall of 1930 when it was used by the Olio to describe Marietta sports teams.

According to McGrew, "From then on, MC teams were 'Pioneers,' derived of course from the College's heritage." He closed by stating, "Oddly, the alternative nickname of 'Blue and White' appeared as early as 1919 and often after that until getting second billing to 'Pioneers.' It still has frequent application, sometimes abridged to 'Big Blue.'"

While there is much of use here, it is possible to find even earlier references to "Pioneers" to describe Marietta athletic teams. In the College's Blue and White in October of 1927, a large headline announced that the "Pioneers" were able to break even in their league games for that season.

Wilbur Schramm's article in the Olio a month later confirms the use of the nickname. In summing up the season, he offered, "If the Pioneers are not a great team next year, we don't know why not."

While there is no existing reference to a campus-wide contest to select a nickname such as the one conducted at Ohio Wesleyan around the same time, the name "Pioneers" appears to have assumed its rightful place by widespread use and acclaim during the latter part of the 1920's.