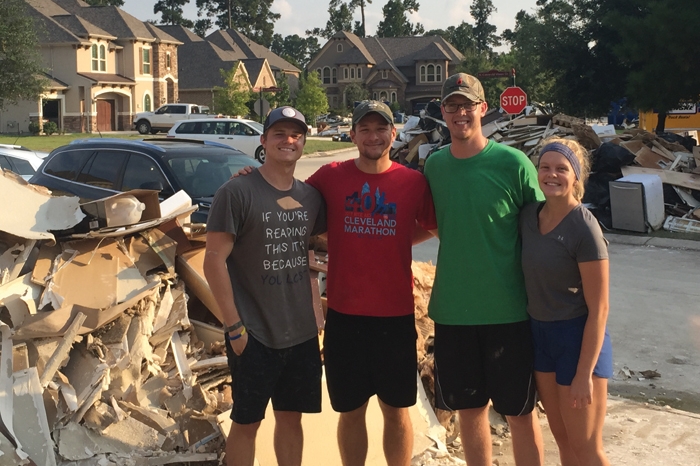 Gregg Dyakon ’17 and his parents watched helplessly as news reports and updates from their Kingwood neighbors came in about how Category 4 Hurricane Harvey was pummeling their community.

The family was in California when the storm hit and had to wait until the floodwaters receded from their neighborhood before they could head home to assess the damage. During the storm, Dyakon kept in touch with three classmates — Brian Raiff ’17, Tyler Nieberding ’17 and Kaitlin Klinchock ’17 — who live just north of Houston in the nearby community of The Woodlands and were also hunkered down for days because of Harvey.

The group became friends during their freshman year at Marietta. Raiff, Nieberding and Klinchock moved to The Woodlands after graduation for work. Dyakon, whose family lives in Kingwood, a suburb of Houston, was getting ready to start a new job when the storm hit.

“After the flooding, my mom and dad rented a U-Haul and filled it full of supplies to drive back to Houston to offer help to our neighbors in need,” Dyakon says. “Local hardware stores were completely out of supplies in the Houston area. I got to the house a day before my parents because I flew in. As I drove our rental vehicle into the neighborhood, I was in complete shock. It looked like a war zone. There were vehicles everywhere and mounds 8 feet tall consisting of trash, furniture, pictures and memories. Not a single home in the neighborhood was unaffected.”

The first glance he got of his family’s home gave him hope that it was OK.

“However, I opened the front door to the sight of an inch of water and tadpoles swimming away from me,” he says. “Couches were thrown everywhere, trash everywhere. Everything on the first floor was destroyed. My mom’s car and my truck were destroyed as well.”

When his friends learned of the damage his home withstood, they offered to help in any way they could. They, too, had watched helplessly as the hurricane settled over Texas and took its toll on families.

Klinchock says Raiff and Nieberding arrived at the house first, and she came as soon as she got off work.

“Just getting off the exit and pulling into the Kingwood area, you could smell the devastation from inside your car: dead fish, rotting wood, spoiled food, wet insulation,” she says. “The smell of it all was the worst part for me; I’ll never forget it. There were piles of debris in driveways and every possible open sidewalk lot.”

The group began helping with cleanup on Labor Day Weekend.

“I can speak for all of us when I say we couldn’t spend the weekend sitting around doing nothing, knowing full well that Gregg and his family needed our help,” Raiff says. “Additionally, the strength of Gregg’s family really inspired us to keep coming back. Their situation and the situation of many Houstonians is completely unimaginable. To have your home destroyed can, and should, break down anyone. But each day, the Dyakons faced their situation with strength and optimism. They couldn’t have been more appreciative of our help.”

For four consecutive days — from sun up to sun down — the team of Pioneers worked together to start getting the house habitable.

“After one of the days, my parents took them out to dinner with us to celebrate my birthday. Without their help, we could’ve been in jeopardy of getting mold in our home,” Dyakon says.

Among the most memorable aspects of Hurricane Harvey for Raiff is the help neighbors provided to each other.

“Each day, neighbors ordered food to help feed volunteers,” Raiff says. “Neighbors came by with coolers full of water, sandwiches and popsicles to make sure everyone was hydrated and well fed. Every person in the neighborhood was directly affected by the floods, yet they still found the time to make sure their neighbors were OK. The countless selfless acts of the whole neighborhood were amazing to see.”

Dyakon says his family, their contractor’s crew, his friends and, for a day, the Second Baptist Church, worked to drain the house of water and mud, tear out the drywall on the first floor and remove all the cabinets and fixtures from the first floor.

“Needless to say, we all did what we could. Anything that Mr. and Mrs. Dyakon needed to be done we did. It was the least we could do for them, and I would do it all over again if something like this were ever to happen again — pray that it doesn’t,” Klinchock says.

His parents can live in the upstairs of the house, but the recovery process will take at least six months.

“Two in every 10 residents of Houston supposedly had flood insurance, and we were one of the very few who had it,” Dyakon says. “Many people in our neighborhood, and in Houston, weren’t fortunate enough to be covered and are suffering way greater than us. We are blessed to be safe and alive and cannot thank God enough for that.”