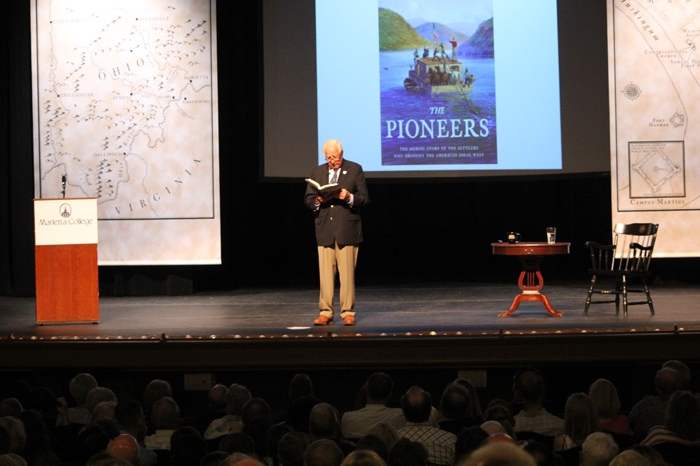 Few people can make history come alive as well as David McCullough can.

Nearly a thousand people packed into Peoples Bank Theater on Friday, May 31st to hear an energetic McCullough share his pivotal takeaways about his latest masterpiece, The Pioneers.

After completing nearly three years of careful research and writing, the Pulitzer Prize-winning author came to Marietta to address an audience full of anticipation. “If someone is going to write about your local history, having it be David McCullough is hitting the jackpot,” said Linda Showalter, the Special Collections Manager at Legacy Library.

For about 90 minutes, the 85-year old captivated his audience with stories, excerpts from the book, and a Q&A session that could have gone for hours if the listeners had their way. With his high energy fully on display, not once did McCullough sit down.

After being awarded the Presidential Medal of Marietta College, as well as a key to the city of Marietta, McCullough expressed his gratitude toward all those who helped him along the way.

“No significant thing is ever accomplished alone,” McCullough said. “The archives and archivists here at the Marietta College Special Collections are among the best we’ve ever worked with.”

In The Pioneers, McCullough highlights notable figures like Manasseh Cutler and Rufus Putnam as he details a fascinating chapter of history. As is well known in this part of the country, in 1788, Marietta was the first settlement founded in the wilderness of the Northwest Territory.

The talk at Peoples Bank Theater, however, was not the only event for McCullough. Arriving in Marietta on Thursday, he was thrilled to show the town to his wife, Rosalee, as well as some of their children and grandchildren.

The McCulloughs toured some of the historic spots he mentions in the book, including Mound Cemetery and the First Congregational Church on Front Street. An impressionable moment for  McCullough happened as he stood in front of the gravesite of Dr. Samuel Hildreth at Mound Cemetery.

He stood and pondered Hildreth’s endeavors: doctor, writer, artist, father, and naturalist, just to name a few. “It’s an absolutely fabulous lesson in what life can amount to,” McCullough said.

The group also visited other graves, including a memorial marker for Gen. Rufus Putnam. McCullough’s longtime researcher Mike Hill and local historian Bill Reynolds were present for the tour as well.

At a special luncheon, Marietta College President Bill Ruud held a toast for the great work done by all those involved in the creation of The Pioneers. He noted the significant impact felt in promoting Marietta to the world, both the College and the community. Members of library faculty also shared their sentiments.

“Some moments imprint themselves on the memory of an institution and a community and become a part of their history,” said Dr. Douglas Anderson, Director of Legacy Library. “David McCullough's new book and his visit to Marietta this weekend are certainly this significant. Tonight was a time to celebrate the contributions and achievements Mr. McCullough, Mike Hill, our library staff and faculty, and local historians have made to spreading the knowledge of this remarkable city’s origins.”

Less than a month after publication, The Pioneers has already brought great attention to Marietta. Louis and Nancy Wright spent some time in the historic Mound Cemetery Friday morning, just before the McCullough group arrived for their tour.

“The book brought us here. We’re from the Northeast,” Louis said. “I just finished the book and we were on our way to Lexington, Kentucky, for a wedding. I wanted to stop in Marietta to see a place (McCullough) describes in the book. It’s very impressive.”

Indeed, the impact of The Pioneers will last for years to come. Marietta College’s Madison McCormick ’21 (Hornell, New York) is a History major who is credited with some of the research in McCullough’s book.

“One day at work Linda asked me to look through some census records for information that David McCullough wanted,” said McCormick, a Special Collections intern. “At the time, I did not really think much of it and just treated it like every other task she asked me to do. It wasn’t until later when I realized just how cool of an experience I had had. … I never expected to be a part of something like this so early. If I were anywhere else, I would have never gotten that opportunity.”

The Pioneers triumphs as David McCullough’s 13th historical account published. It has already spent all three of its first weeks atop The New York Times' best-seller list and will continue to reach audiences far and wide.