Alumna uses her professional experience to defend the Carolina shoreline 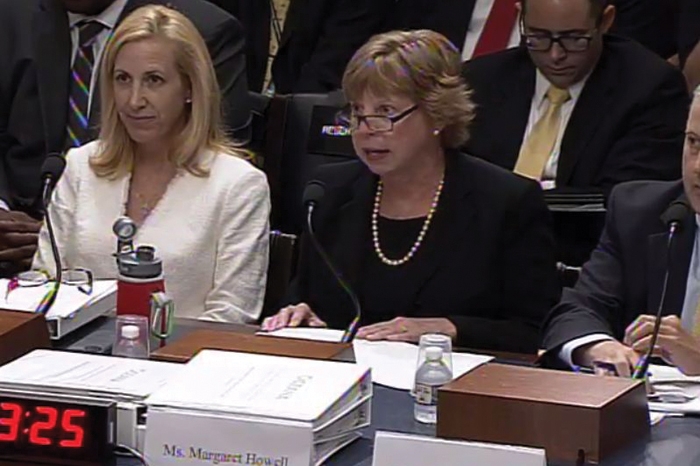 Peg Howell ’77 was the first woman petroleum engineer to drill oil wells in the Gulf of Mexico and worked for years in the energy industry before starting a consulting firm geared toward developing senior executives in Fortune 500 companies.

These days, she spends a great deal of time educating legislators on why states along the Atlantic coast should not permit drilling off their shores. Howell is one of the founding members of SODA — Stop Offshore Drilling in the Atlantic — and has testified before the U.S. Congress and across her state to discuss the economic and ecological harm exploration off the South Carolina coast will cause.

She testified in July before the U.S. House Subcommittee on Energy and Mineral Resources about the effects of developing the Atlantic Outer Continental Shelf.

“Every five years, the Department of Interior is charged with looking at offshore regions to be considered for development,” Howell says. “In 2015, the Bureau of Energy Management, which is part of the Department of Interior, sought out coastal states that wanted to participate in that program. The former governor of South Carolina (Nikki Haley), along with the governors of North Carolina, Virginia and Georgia, put the Mid- and South Atlantic in the mix. It was the first time the Atlantic coast had been considered for decades.”

Howell and other residents on Pawleys Island, which is off the coast of South Carolina, were concerned about what offshore drilling and exploration would do to their community and others along the Atlantic Coast. The group of residents comprising SODA includes a Petroleum Landman, several engineers, an information technologist, a physicist, a former Congressional Chief of Staff, a lawyer, a realtor and a minister, among others.

In May 2016, the Mid- and South Atlantic regions were pulled from consideration for the 2017-22 program. Though the regions were removed from the program, they were not exempted from potential seismic testing — the first step in offshore exploration — until January of this year. In April, President Donald Trump signed an executive order to overturn those previous decisions and expedite seismic testing and drilling permits.

“The issue with seismic testing is the amount of noise it introduces into the ecosystem, which causes tremendous harm to marine mammals,” Howell says, noting that the inescapable noise would impact the most vulnerable species, like the North Atlantic right whale, in their ability to communicate, feed, navigate and mate. “Huge amounts of sound are blasted into the ocean, and all it provides to geologists is an indication that there might be geologic structures that could contain oil and gas. In the ’70s and ’80s, some wells were drilled in the North Atlantic and off the coast of Georgia, but they ended up being dry holes — nothing of
commercial interest.”

Like Howell, Jim Watkins, chair of SODA, has worked to protect the Atlantic coastal region from drilling for three years. Like most of the SODA members, Watkins has an eclectic professional background that provides expertise to the group — he is a retired infantry officer, a retired Presbyterian minister and a former District Staff Director for a U.S. Congressman.

“Peg understands that leadership skills are transferable,” he says. “She brought to SODA skills that she has used in other parts of her life. She combines technical knowledge with interpersonal relationships. With her oil drilling background, she brings immense credibility.”

Howell recalls how her undergraduate time at Marietta College helped to prepare her for professional experiences she would have throughout her life.

“I remember (former Petroleum Engineering professor) Elmer Templeton convinced me that whatever I did with my life, petroleum engineering would serve me for my entire life, and it has,” Howell says. “In 1977, this was a great career. Also in ’77, we lived with the expectation that there were only 40 years left in the oil and gas reservoirs. We anticipated that alternative energy sources would become the mainstay.”

Beyond the ecological impact, Howell says the Atlantic coast heavily relies on a flourishing tourism industry. SODA recently conducted a “tourism vs. oil” study that examines the financial tradeoffs that would take place if oil and gas exploration took over the coastal communities. “Our tourism economy alone is more than 20 times more valuable than oil and gas exploration and production off our coast,” she says.

In her congressional testimony, she highlighted that the Atlantic coast economy of 1.4 million jobs and more than $95 billion in gross domestic product relies on a healthy coast and ocean ecosystems for fishing, tourism and recreation.

“Fighting offshore oil and gas exploration in the Atlantic is not fighting the industry, per se,” Howell says. “It’s fighting decisions that are fool-hardy. Why in the world would we introduce a high-risk, finite industry that is incompatible with and would jeopardize our very successful coastal economy?”

As for the future, Howell finds hope in the fact that so many coastal residents and politicians are united in protecting the Atlantic coastal region.

“We have to ask ourselves, ‘What are we leaving for our children and our grandchildren?’” she says. “And then we have to act.”