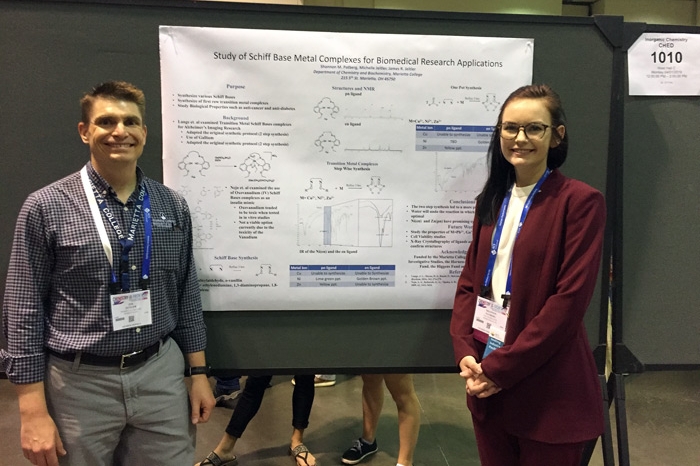 “The opportunity to present at ACS was amazing,” said Patberg, who is majoring in Chemistry. “It was so exciting to exchange ideas and converse with some of the top scientists in the nation. It’s an opportunity I could not have done without the support of the department — they teach us how to think critically and although the course load is rigorous, it has made me a better chemist.”

Patberg’s research involved synthesizing a compound that made a first-row transition metal compound not previously seen in the literature and is believed to be a stepping stone for mimicking insulin and aiding in the diagnosis of Alzheimer’s disease. This research ultimately led Patberg to three internships sponsored by the National Science Foundation, and the opportunity to continue her research over two summers at West Virginia University where her work was published in a scientific journal.

In addition to her research at Marietta and WVU, Patberg also spent a summer at the University of North Carolina-Charlotte investigating energy efficient OLED’s and Solar Panels, which she also presented at the conference.

“Marietta has not only given me the independence to experiment with my own ideas and Dr. Jeitler’s (ideas), but also the amazing opportunities with the NSF,” she said. “I could not have done any of it without the support of the Chemistry Department — especially Dr. Jeitler and Professor Jeitler.”

This is the fifth consecutive year the Department of Chemistry and Biochemistry was represented at the ACS Conference by students presenting the results of original research.