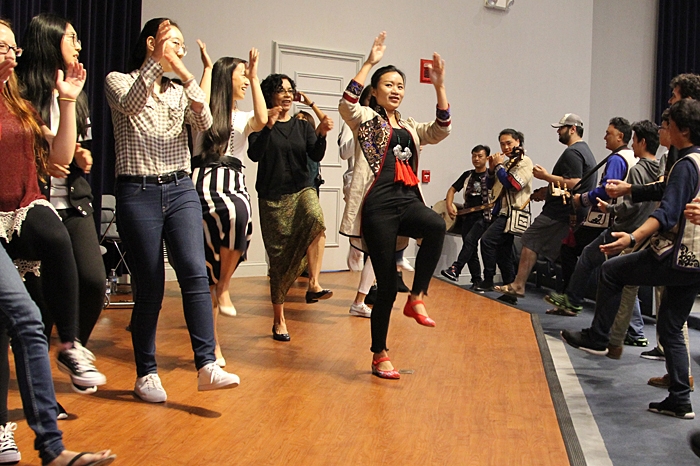 Being able to watch a performance by a visiting band of Chinese folk musicians just before lunch is exactly the type of experiences that Graham Nesselrode ’21 (Vienna, West Virginia) has come to expect at Marietta College.

Manhu — which means “fierce tigers” in Mandarin Chinese — is a group of five musicians who come from the Stone Forest region of Yunnan Province in southwest, China. The musicians spent a week in Marietta as part of the Arts Midwest World Fest program, which connects small and mid-sized towns in the Midwest with a variety of cultural performers from other countries. The troupe visited campus Friday, October 6th, to give two performances and workshops to students, staff and faculty. Their final performance in Marietta was on Saturday at Peoples Bank Theatre.

“I always knew Marietta had a very diverse campus,” he said. “But it wasn’t until I got here, joined the Global Connections group and met my friends, that I really understood that Marietta College is an epicenter of culture.”

Nesselrode, who is earning degrees in International Business and International Leadership, was impressed with the quality of music the group performed.

“Folk music is all about sharing and reviving one’s culture, so it’s very important to listen and learn,” he said.

During the free performances, the group’s interpreter and workshop facilitator, Josh Dyer, discussed the region of China from which the group originated and translated as the group introduced themselves and talked about the various instruments they play. They also engaged the audience in learning a traditional community dance.

In addition to giving two workshops at the College, Manhu also visited the Marietta High School, Middle School and held a workshop at the Peoples Bank Theatre for elementary schools in the area.

Awa, who plays percussion in the group, was surprised that the group interacted with about 1,500 children and young adults in the six days they had been in Marietta.

“He says he also didn’t expect the kids to be so receptive to learning about their culture and were genuinely interested,” Dyer said, adding that the group was proud to share their heritage with people in areas like Marietta. “They’ve learned their culture from the elders in their village, and they know it’s up to them to keep that culture alive, so this is a privilege for them.”

Assitant Professor Jenni Zhang brought students from her Chinese language classes and her First Year Seminar — Journey to the East — class to the performance.

“At Marietta College, one of our seven core values is Global Perspective and Diversity,” Zhang said. “It is our mission to prepare students to thrive in a diverse society and in a world where social interaction, work, and exchange occur across geographical, cultural, and linguistic boundaries. Bringing performances that highlight different cultures to campus, offers MC community the opportunities to explore the art, people, and lifestyles from other parts of the world. This is a great opportunity for our students and faculty to communicate with the artists from outside of the US. Learning and experiencing the different cultures, will help students broaden their horizon, and prepare them to be a world citizen with cross-cultural communication and critical thinking skills.”

Marietta was selected to host four different global acts during the 2017-19 Arts Midwest World Fest series. In the coming months, the community will also be home to performances by Sofi & the Baladis (from Israel), Ondekoza (from Japan) and the Unni Boksasp Ensemble (from Norway).