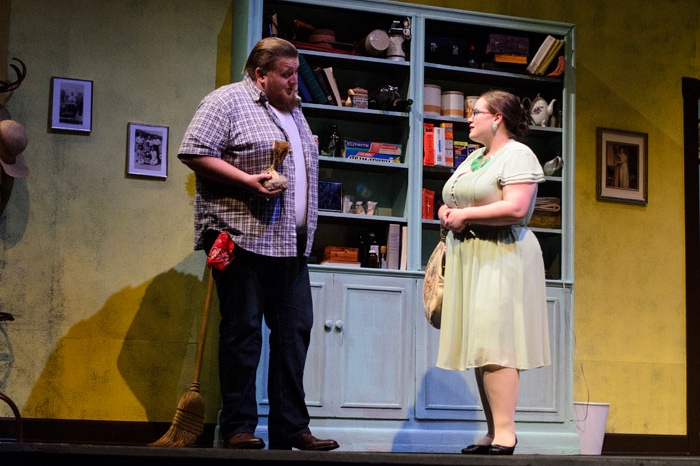 A sense of community is a defining feature of life on campus at Marietta College and throughout the surrounding town. This year, that communal spirit will be most prominently displayed in the Hermann Fine Arts Center as The Theatre at Marietta College’s 2017-18 season centers around the theme “Of, For & By Our Community.”

Following that theme, community members are invited to audition for a role or apply to be a designer in two different productions this year.

While such community collaboration and engagement is a new addition to theatre productions at Marietta College, faculty and students throughout the department have recently been working with community institutions to great effect.

“An important part of our departmental mission statement is that we strive to make a meaningful contribution to the cultural conversation for both the Marietta College community and the Mid-Ohio Valley region,” said Andy Felt, Artistic Director and Associate Professor of Theatre. “In July, we wrapped up our fifth consecutive Shakespeare by the River Festival, which brings together pre-professional theatre students from across the country, our own Marietta College students, and theatre artists from the community to produce professional-level summer theatre. Our collaborations with members of the community have been incredibly beneficial to our students and are a great source of pride for our program.”

Felt believes by inviting the public to be a part of the academic production season they will get to celebrate the collaboration, strengthen ties with local community theatre groups, make new connections with neighbors, and share in the dynamic learning that happens each year in the Hermann Fine Arts Center.

“We want community members to know that we consider them an integral part of our department and sincerely hope they understand that The Theatre at Marietta College is theirs as much as it is ours,” he said.

Through these collaborations, students have already worked backstage at the Peoples Bank Theatre, performed in local shows and worked on local films and television and radio commercials. Perhaps because of these incredible opportunities, students are looking forward to this new engagement throughout the academic season.

“This is the first season, while I’ve been at Marietta, that we have had open auditions for community members for shows, so the level of community involvement is changing drastically,” said Tara Clinton ’18 (Mechanicsburg, Pennsylvania). President of Alpha Psi Omega theatre honorary. “Going from only having community members as audience members to cast members will be a cool experience. It also really exemplifies this season’s theme by showing the Theatre at Marietta College’s passion to engage and add to the arts in the Mid-Ohio Valley.”

The season will kick off with Doubt: A Parable at 8:00 p.m., Friday, September 22nd. Directed by Casiha Felt, Doubt was the 2005 winner of the Pulitzer Prize for Drama and Tony Award for Best Play. Described in Time Out NY as “An eloquent and provocative investigation of truth and consequences,” Doubt centers around, Sister Aloysius, a Bronx school principal, who takes matters into her own hands when she suspects the young Father Flynn of improper relations with one of the male students.

In support of the season’s theme, Associate Provost of Undergraduate Education Dr. Suzanne Walker will play the role of Sister Aloysius.

Though it is set in 1964, Felt says that Doubt is a play “that is increasingly relevant as our world becomes more affected by disinformation and outright lies perpetuated by public figures and media sources.”

At 8:00 p.m., Saturday, October 21st, the 12th annual New-Plays-in-One-Day-Festival will take place in The Hermann Fine Arts Center. Free for all attendees, this exciting Homecoming Weekend tradition showcases new works written, rehearsed and performed by students and alumni who work side-by-side on the productions over the course of just one day.

In November, community members will have their first chance to take to the stage or assist behind-the-scenes for the production of Tartuffe.

“We will be inviting the public to come out and audition for this production which works out well since there are a number of mature roles in the play that need to be filled,” said Andy Felt, who is directing Tartuffe.

Premiering at 8:00 p.m., Friday, November 10th, Tartuffe is France’s greatest classical playwright, Moliere’s, merciless examination of the evil that men can commit in the guise of religious fervor and the dangers that imperil those who would believe only what they choose to believe despite a mountain of evidence to the contrary.

As one of the greatest classical comedies ever written, Tartuffe is hysterically funny and tantalizingly thought-provoking as it examines religious hypocrisy.

The 2018 One-Act Festival will launch the spring portion of the theatre season. Held from March 1st-4th, the festival is a dynamic weekend of theatre education in action as student-directed short plays are in rotation. Show titles, dates and times for this free event will be announced in January.

In April, the Theatre will call upon some of the youngest and spryest theatre-lovers in the area to participate in the production of Annie: The Musical.

It was ultimately the desire to do a big classical musical like Annie that made the theme of community involvement a clear and easy choice for the theatre and music faculty. As Felt jokingly conceded, it’s hard to do Annie without a collection of young children.

The irrepressible comic strip heroine takes center stage in one of the world's best-loved musicals. With community members of all ages featured, this family friendly production is sure to be one of the most exciting theatre events of the year.

Those young-at-heart will of be encouraged to join in the fun when Annie, directed by Aurora Held-Dodd, premieres at 7:00 p.m. April 6th.

Auditions for Annie are set for November 28th-30th. All roles are open.

The pricing information for this theatre season is as follows: