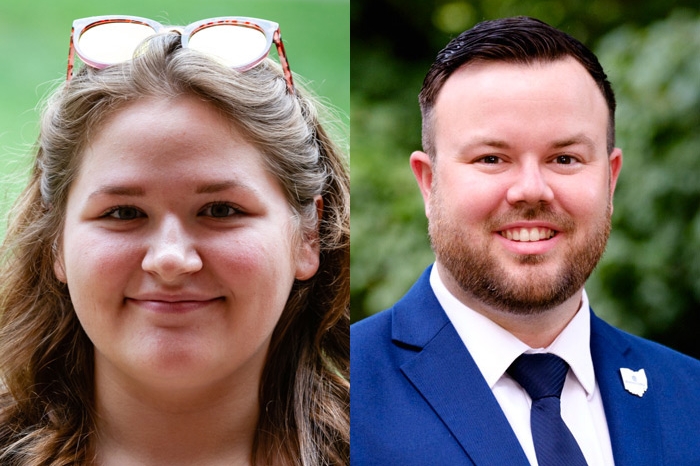 Watching your undergraduate student excel during an event that includes mostly graduate students is a proud moment for any professor. Seeing that same student take top prize for the work is even better.

For Dr. Cody Clemens, Assistant Professor of Communication, the 2020 Ohio Communication Annual Conference — conducted virtually in October — was his former student, Samantha “Sam” Rubadue ’22’s moment to shine, as well as an opportunity to mark his own achievement of being elected Vice President of the Ohio Communication Association.

“The Ohio Communication Association is one of the longest state communication associations around,” Clemens said. “In the role of Vice President, I am responsible for running the business meeting at the Ohio Communication Association Conference every year, I assist the President with duties, I assist the four members At-Large with any duties that they need, and I also take part in helping the conference coordinator with anything they need help with — so it’s truthfully an administrative role.”

“It’s actually a six-year commitment, so it was something that I definitely had to think about before I decided to take on the role,” Clemens said, “but I’ve been a member of the Ohio Comm Association since 2014 and it just kind of seemed like the right time for me. I finished my Ph.D. in May, and it was kind of a natural fit, so I was ready to take on the role; I was excited. The President I’ll be working under is Dr. Amber Ferris, she’s at the University of Akron. I’m excited because she has been a wonderful colleague through the years and a mentor.”

During the poster session of the OCA’s virtual conference, Rubadue (Ironton, Ohio), a Communication Studies major, presented, “Beauty, the Beast, and Brutality: A Critical Analysis of Disney’s 1991 Film,” which summarized key points of a research paper she wrote for Clemens’s COMM 386: Difference, Power and Privilege course during the Fall 2019 semester. Rubadue’s was one of two posters selected for the prize and the only one presented by an undergraduate student.

“I have a lot of good things to say about Sam,” Clemens said. “Sam Rubadue is truthfully one of the brightest students I’ve ever had the pleasure of teaching, and I look forward to seeing her grow and excel in her academic career in the years to come.”

The inspiration for Rubadue’s topic largely came from a previous class she took with Lori Smith, Assistant Professor and Chair of the Communication Department. The course, Media & Society, had a section that discussed racial and gender stereotyping that can be seen across several different popular childhood cartoons, which prompted Rubadue to consider how other behaviors could also be similarly translated.

“When Dr. Clemens assigned our research paper, which was a critical artifact analysis that paired up with some kind of an issue that we covered in class like gender or race that we could relate to ourselves, I decided that I wanted to look at some kind of well-loved media that had some problematic undertones and really pull it apart and analyze it pretty much scene by scene,” Rubadue said.

For Rubadue, Clemens’ class also provided an opportunity for personal growth as she engaged in open discussions with her professor and fellow classmates about difficult topics that often brought out differences of opinions.

“I also just want to mention how supportive Dr. Clemens has been throughout this whole process,” she said. “He took a lot of time that he didn’t have to make sure I was prepared for this and that I had all the resources I would need. This was the first time I’ve presented anything outside the campus, and it was definitely both terrifying and exciting at the same time and I don’t think I would’ve been nearly as confident doing this without the constant support and reassurances that I got from Dr. Clemens, who was there every step of the way.”