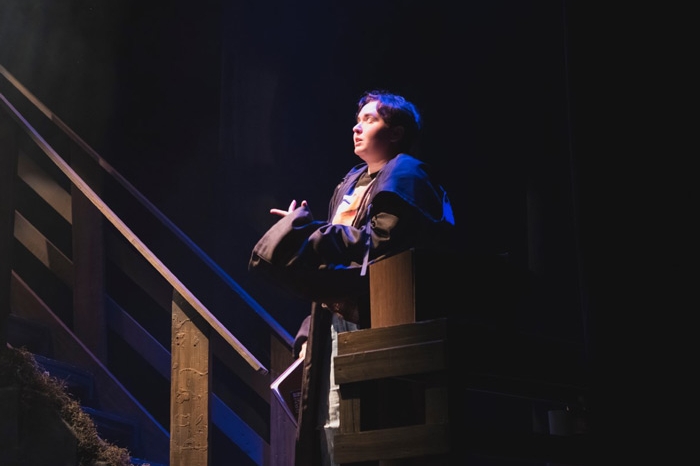 Gwen Sour '22 (Parkersburg, West Virginia) has made a lot of her time at Marietta College.

In just two short years, she has become a member of Alpha Psi Omega, Chi Omega fraternity, the Dungeons and Dragons Club, and the LGBTQ+ Activism Club. As the first student to be accepted into the College's BFA in Theatre Directing, she has also been selected as this year's recipient of the Evans Endowment Fund for her internship in Cleveland with the Dobama Theatre.

"They do a lot of work with newer shows, trying to breathe new life into the theatre industry," Sour said of the Theatre. "I will work on the Marylin Bianchi Children's Playwriting Festival as an Assistant Director, and the Dobama Emerging Actors Program as both an Assistant Director and Dramaturg."

However, she will have to wait until Summer 2021 to start the internship following the cancellation of summer activities due to the COVID-19 pandemic.

Denise and Mike Salvino '87 established the Evans Endowment Fund in the spring of 2010 to honor Robert Evans and his contributions to Marietta College and the McDonough Leadership Program. The program awards $5,000 to one rising junior or senior who participates in an internship in a for-profit organization.

The $5,000 can be used for relocation, travel, housing, meals, related equipment purchases and other living expenses. Eligible applicants can be in any undergraduate major with a minimum GPA of 3.0.

"Dobama is one of the most prestigious and influential theatres in the Midwest," said Andy Felt, Associate Professor and Artistic Director of the Marietta College Theatre Department. "They are widely regarded as the "off-Broadway" of the region and continue to offer professional quality, meaningful and often groundbreaking work to the public."

Interns at Dobama Theatre assist in at least two mainstage productions per season and shadow the Artistic Director and Production Manager for the remaining productions. They assist in theatre operations and the rehearsal process, and can often take part in directing smaller-scale projects, including readings, events and education programs.

"Theatre is all about who you know and what connections you can make within the industry,"

In late April, Sour was also awarded one of the highest honors given by the Theatre Department: the Loreman Scholarship. This scholarship is awarded to a rising junior who has made significant contributions to the department.

"Gwen was the unanimous choice of the department faculty and staff," Felt said. "In my opinion, Gwen has shown the greatest improvement between two academic years I have ever seen. She improved as a student in the classroom, as a director, as an actor, as a designer and as a student leader."

Sour said she has been involved in every show the Theatre Department has put on during the past year.

theatre artist generally, and as a director specifically," Felt said. "I'm certain that working for an excellent organization like Dobama will bolster her self-esteem and help her 'take charge of the room' with more surety and ease. She will also get the opportunity to learn first-hand how a non-profit professional theater operates, and I hope she can use that experience to help her produce her own work in the future."