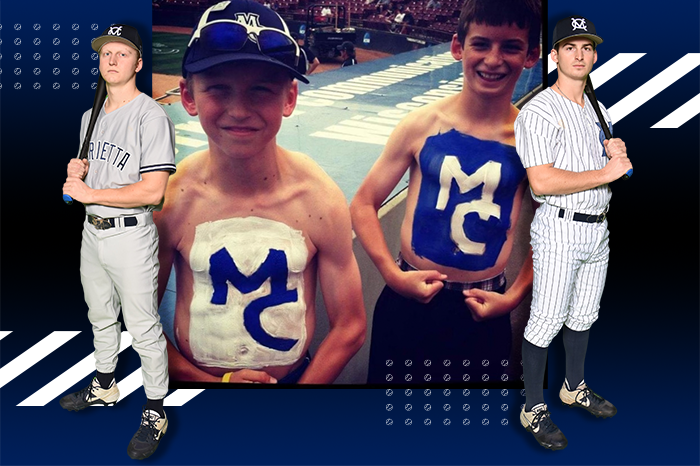 Kail Hill was only 10, but he vividly remembers having “Hopper 24” painted on his back as he and his family cheered on Marietta College’s baseball team as the Etta Express won the 2012 NCAA Division III Baseball Championship in Appleton, Wisconsin.

“I also remember telling everyone I put on sunscreen, which I didn’t,” Kail said. “So, for the rest of the summer, every time I took off my shirt you could see where Hopper 24 was sunburned on my back.”

Kail’s older brother, Turner, didn’t fare much better. On his back for weeks after Marietta’s sixth national championship was “Brock 33,” for his uncle Evan Brockmeier. Hopper was in reference to Aaron Hopper, who earned third team All-America honors as an outfielder in 2012.

Fast forward 10 years and the Hill brothers, who both starred at Marietta High School, are heading back to the World Series — this time as players on the 2022 squad. The top-seeded Pioneers (43-5) will face newcomer Catholic University (34-14) in the tournament opener at 11:00 a.m. EST.

“I’d always wanted to be part of a program with a culture of competing for national championships. It played a huge role in me wanting to come back,” said Turner, who transferred from Malone University after the 2020 season. “It’s a blessing to be a part of this. We’ve worked so hard. We try to work harder than everyone in the country.”

A photo of the two Hill brothers appeared earlier this week on social media when their father, Steve Hill, a Marietta firefighter, posted the following: “In 2012 I took my two sons, Turner & Kail to the College World Series to watch @EttaExpress_MC win it’s 6th National Title. I promised them we would go again the next time Marietta goes to the World Series. I’m a man of my word!”

“I remember taking that photo in the third-base bleachers,” Steve said. “They were little guys who loved baseball and loved Marietta College baseball. They knew every player on the team. The boys were chasing the foul balls and all the things kids that age would do. And then you add in the excitement we all felt when Marietta won the national championship.”

The Hills hope to enjoy another national championship as a family. But Kail and Turner, jokingly, said that their dad isn’t really taking them this time.

“We’re making him go,” Kail said. “I know he’d take us no matter what, but I know he’s excited that we are on the team this time.”

Coming out of high school, neither Hill was recruited by Marietta. Instead, both attended Malone. But following the shortened 2020 season due to COVID, the brothers wanted to transfer to the program they grew up cheering for most of their lives.

Turner enters the World Series with a team-best .436 batting average and 32 stolen bases. He was also named fourth team All-America by D3Baseball.com on Wednesday. Kail is 1-0 on the mound after appearing in 12 games.

“It has worked out for both of us,” said Turner, who was the co-OAC Player of the Year with teammate Damian Yenzi. “This is going to be a cool experience for my entire family.”

Like many of Marietta's seniors, Turner also knows his amazing baseball career could be coming to an end.

Steve is also coming to terms with Turner’s career coming to an end and that both of his sons be a part of the Etta Express’ seventh national championship.

“On the first day of the Super Regional, when I walked up the steps to see Pioneer Park it became real. I started piecing together what was going to happen. I just kept picturing those guys at 4 and 5 years old and me throwing Wiffle balls to them,” he said. “But this also goes beyond baseball. I’ve watched them both grow and mature as men. I’ve always told them that what you are is far less important than who you are. This program has helped them become better people. What they are is pretty neat, who they are is far more important.”