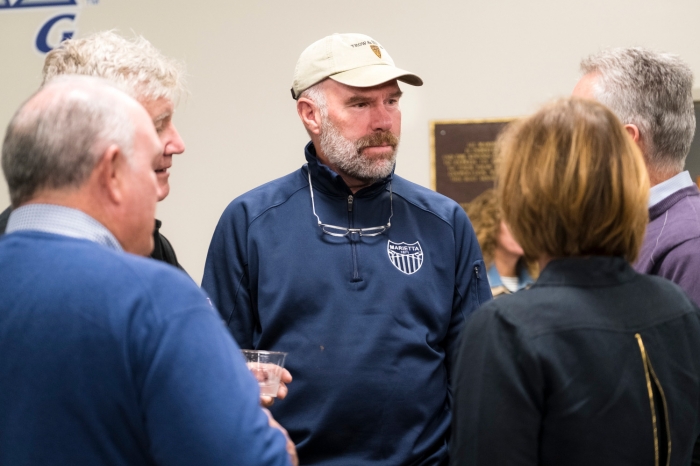 Marietta College alumnus and a former Pioneer Rowing coach, Jeffrey C. Hugel ’77, has given an unprecedented gift to create two major endowments in support of the College’s rowing teams.

Hugel has committed to giving $253,000, annually, for the remainder of his lifetime, to establish the Marietta Rowing Coaching Fund and the Marietta Rowing Operations Fund in support of the men’s and women’s crews, helping to ensure a bright future for the programs.

Of that yearly donation, $153,000 will supplement the operational budget and $100,000 will be split between the two endowments.  Further, upon his passing, his estate will provide a gift of at least $3 million to support the two funds.

“With his drive, and the value he places on teamwork and putting his dreams into action, Jeff truly exemplifies the Pioneer spirit,” said Marietta College President William Ruud. “All of us at Marietta are deeply grateful for Jeff’s commitment. This gift will have a dramatic impact on the rowing programs for years to come.”

“The strength of Jeff’s gift lies in creating endowments that will support the rowing teams far into the future,” said Marietta College Director of Athletics Larry Hiser. “As huge as this is for The Long Blue Line, it is really just an extension of Jeff’s humble approach to life. He loves to help in any way he can.”

Hugel said Marietta rowing made a huge impact on his life.

“Marietta rowing made me the person I am today,” Hugel said. “I am lucky to be in a position where I can give back to help future generations of students to have the kinds of experiences I had. I wanted to deliver a gift now so the program can reach the next level of success.

“We have all of the elements in place,” he said, “great leadership in Dr. Ruud and Larry Hiser, two excellent head coaches in Coach Myhr and Coach Klicker, a state-of-the-art boathouse and one of the best bodies of water to row on in the nation.”

Hugel considers rowing to be the quintessential team sport.

“In fact, if you stand out, you’re doing something wrong. In rowing, you win as a team and you lose as a team. This makes the emphasis on teamwork so much more intense.”

Hugel, a freshman walk-on rower who described himself, at that time, as an incredibly shy and uncoordinated individual, credits the Pioneer Navy with helping him to achieve his first successes in life.

During his junior year, Al Rosenberg, the then USA National Team rowing coach, visited Marietta to teach a clinic. Rosenberg filmed and critiqued each of the rowers, and directed Hugel to make an adjustment to his stroke.

During the critique of each rower, Coach Rosenberg called the team’s attention to one rower in particular, saying, “look at this guy; this might be the best rower on the team.”

“Hugel??!!” he recalled the team’s surprise. “Suddenly all heads turned to look at me where I had hidden in the back row.”

Hugel had propelled himself from being one of the poorer rowers during his freshman year to being, arguably, one of the better rowers two years later, stroking his junior varsity heavyweight eight to win the prestigious Dad Vail Regatta in 1976.

His passion for rowing has never waned.

After graduation, he coached at Clark University in Worcester, Massachusetts, for two years. He returned to Marietta College to coach the women’s team for the spring semester in 1981, an appointment that was cut short when he met, and married, the love of his life, 1977 Wittenberg University graduate and then fourth-grade Harmar Elementary schoolteacher, Susan Strong.

He retired from his position as Global Manager of SAP Security and Access Control for General Motors in 2016, after a 32-year career in Information Technology, and returned to coaching once more with the University of Delaware men’s heavyweight rowing team for the 2017-18 season.

Hugel’s love of the town of Marietta, and the College in particular, is infectious. And his passion and support for the Marietta College rowing team is as extensive as his knowledge of the program.

He helped to support the $1 million renovation to the Lindamood-VanVoorhis Boathouse, which was completed in 2016, has donated toward numerous shells, including the most recently acquired “Off the Hook” Empacher, which the varsity eight rows, and recently even contributed a new 2020 GMC Sierra HD Denali to the team.

“If you know Jeff, you know that, in terms of life events, his experience with Marietta Rowing is second only to meeting his wife, Susan,” said Greg Myhr, who joined the Marietta College Athletic Department as head coach of the men’s rowing team in August 2019.

“Jeff understands where we are in terms of being a small, Dad Vail team with aspirations of building an IRA-caliber program,” Myhr said.  “His commitment to these endowments is rooted in the dream of achieving that level of competitiveness. Until now, Marietta has had to do a lot with very little.”

“The pathway to the IRAs for the men’s program is through the medal stand of Dad Vails,” Hiser said. “We want to restore Marietta to Dad Vail dominance and use this as a springboard to row at the IRA. Without a gift of this stature, it would be hard to set this as our goal for the program.”

“Despite the Dad Vail now attracting larger schools with significant budgets and larger enrollments, Marietta is a Dad Vail school and always will be,” Hugel said. “It’s in the DNA of the College and my fellow rowing alums.

“My gift, along with the support of other outstanding rowing alumni, will allow us to attract and retain quality coaches, add additional funds to support team goals, travel to more regattas and ensure that we are rowing and training with the best equipment.”

Hugel hopes that his commitment to Marietta Rowing will spur other alumni to get involved as the program reaches its 150th anniversary in 2021.

“My gift is not the end, but the beginning of the next phase of Marietta College rowing history,” he said.

Formed in 1871, the rowing team became the first athletic team ever established at Marietta College, growing to become a varsity team in 1931. An original charter member of the Dad Vail Regatta, Marietta won the inaugural race in 1934 and has never missed one since.

The women’s team formed in 1977 when legendary coach, Ralph Lindamood, cautiously agreed to let a group of female students borrow a boat. Since then, the women have claimed seven Dad Vail gold medals, two of which, in 2011 and 2012, were aided by rowing alumna Abigail Klicker ’13 who returned to her alma mater as head coach of the women’s team in 2018. The 2011 and 2012 women’s crew also qualified for the NCAA Tournament.

The Marietta men’s rowing team has 39 Dad Vail gold medals to its credit, including five varsity heavyweight eight golds. Its gold medal sweep of the heavyweight eight events, in 1967, is a feat that has only been accomplished twice in Dad Vail history.  The men’s team won its last championship in 2012.

“Greg has a tremendous record of building competitive programs, and he is already having a positive impact on rowing at Marietta,” Hugel said. “I am very excited about the way things are going and I look forward to watching Marietta come back as a force in rowing.”

“We have a long road to travel,” said Myhr, who is setting his most immediate sights on winning the Dad Vail, “but Jeff has given us the tools to get there. He’s made the dream very achievable.”