Recent grad discovers the power of The Long Blue Line 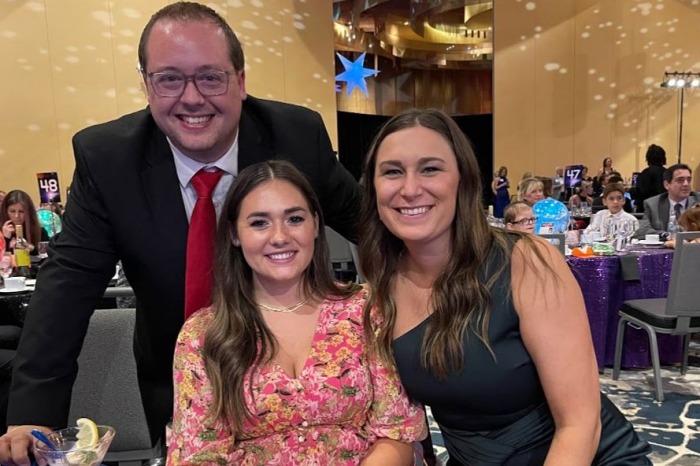 Katen Petty ’22 learned a key lesson as she searched for her first job after graduating from Marietta College in May.

“I was on the job hunt and preparing to move to Cincinnati,” said Petty, who was venturing away from the Mid-Ohio Valley for the first time. “I was having some trouble making connections in the city and then a Marietta College graduate, Paige DeVriendt, reached out to me.”

DeVriendt ’14, who is an Account Supervisor at Moroch, was looking for an Account Coordinator to join her team to help on local McDonald’s Co-Op marketing plans in the Ohio and Virginia areas.

“Whenever I am looking to hire for a position or Moroch is, my first thought is ‘who do I know that might know someone who could be good for this?’ and by default, most of the ‘who do I know’ are Marietta grads because I’ve kept in touch with a lot of people from my time there,” DeVriendt said. “I got my first job out of college thanks to the help of Lori (Smith) and other Marietta grads, and it’s extremely important to me to pay that forward and help get other grads a foot in the door.”

DeVriendt said working at an ad agency is unique and requires a certain type of person — which includes the right mindset and educational background.

“Graduates from Marietta weren’t all I considered, but I was hopeful that we would find someone qualified from Marietta because I knew they would have some of the qualities and skills necessary to grow and be successful in this type of role,” she said.

Petty has been on the job for more than a month, and so far, the experience has been positive.

“I was a Marketing major, and this was right up my alley. I couldn’t have picked a better job, and it’s an honor to work with them,” Petty said. “When you’re at Marietta College, they always talk about The Long Blue Line. I didn’t really think about how it might help me, but I have learned there is a loyalty among our graduates, and we want to help each other. So, my advice to all Marietta College students and graduates is don’t doubt your connections or the power of The Long Blue Line.”

DeVriendt is all too familiar with how Marietta alumni play a role in finding a job, especially with Moroch.

“I first started with Moroch in the Spring of 2014 as an intern at the Parkersburg office. Danica Cunningham (Class of 2013) hired me for the internship where I also got to work with two more Marietta grads — Damon Ketchum (Class of 1996) and Tricia Adkins Cherrison (Class of 2008),” DeVriendt said.

After graduation, DeVriendt joined Moroch full-time in San Antonio, Texas; and after three years, she relocated to Ohio in 2017 but had to leave Moroch.

“Nothing compared to my experience at Moroch, and I realized I would not have the tools and skills I was able to continue fostering to help build my career without that starting point,” DeVriendt said. “In March 2022, Damon and Tricia reached out again to see if I’d be interested in coming back fully remote. I happily accepted and have been back since.”

Once again, The Long Blue Line at work.

“There’s something about the little town and school that attracts some of the hardest working, most driven people I know, with the biggest hearts,” DeVriendt said. “I think that’s what keeps us all so connected — everyone is very genuine and wants to help lift others up, which leads to a lifelong connection.”