Marietta experience helped prepare Millheim for Ph.D. program at U. of Pittsburgh 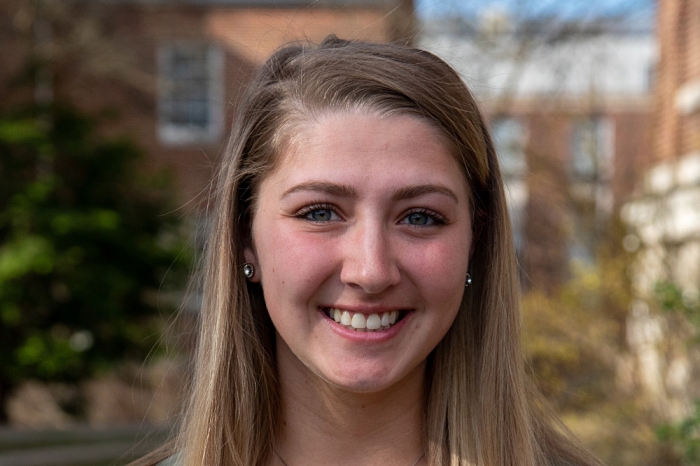 Ever since she conducted her first undergraduate research as a freshman, Shelby Millheim ’22 (Bethlehem, Pennsylvania) has wanted to turn that passion into a career.

Millheim’s plan is coming together. Starting in August, she will spend the next five years working on her Ph.D. in Chemistry at the University of Pittsburgh — a program that is internationally recognized for its excellence in chemical research and education.

“It kind of makes me nervous going to a big school from a smaller school like Marietta, but I think I’m very prepared for it,” Millheim said. “One of the research groups that they have at Pittsburgh that I was able to meet on my visit, I just really enjoyed the work that they do, and they did something along the lines of sustainable chemistry.”

Millheim was also accepted into a similar program at Lehigh University, which is in her hometown. However, she feels the program at Pitt gives her the best opportunity to achieve her ultimate goal.

“I want to be a researcher with the EPA,” she said. “I have taken multiple sustainability courses here. There are so many issues — like the air quality, the water quality — but I don’t know if I know a specific area that I want to go into. My capstone project last year was on nanocrystals that can be used in batteries, and they were made from more sustainable metals rather than lithium, which is a little bit more precious than some of the other ones that we know about. There are so many different fields that you can go into.”

Dr. Debbie Egolf, Professor of Chemistry, said Millheim has been remarkably dedicated to her work and is very self-motivated. Millheim spent her freshman and sophomore years learning and practicing experimental techniques. Early in her junior year, Egolf encouraged her to choose her own research direction, and Millheim decided to investigate proton-transfer fluorescence quenching.

“After conducting some initial experiments, Shelby identified a specific hypothesis that she wanted to test; then she applied to Marietta College’s Investigative Studies program in order to conduct focused research to investigate her hypothesis,” Egolf said. “That program enabled her to get a great start on her project, which she has continued in an expanded form in her senior year as an Honors thesis, a fitting culmination to her work. Additionally, last month Shelby presented her work at a national chemistry conference, the American Chemical Society meeting in San Diego, where she represented herself and the College admirably.”

As a Chemistry major, Millheim spent countless hours inside the Rickey Science Center conducting research and studying. But she also found time to be a member of the women’s lacrosse team and the Alpha Xi Delta sorority.

“Shelby has done a wonderful job of balancing her time at Marietta College, between being a starter on the women’s lacrosse team, to being a leader in her sorority, to excelling in her academics,” Egolf said. “She is well-prepared for her next step, graduate research at the University of Pittsburgh.”

Millheim was one of the first recruits to commit to Coach Malory Nadrah and the women’s lacrosse program. Nadrah said Millheim has been the face of the program for the past four years.

“Early on, her leadership was evident,” Nadrah said. “Ever since I met Shelby, she has been incredibly bright and is a joy to be around. She is so dedicated, mature, brilliant, and respectful. Anything she is a part of gets her full attention and maximum effort. She balances all of her endeavors incredibly well and has truly defined what it means to be a Division III student-athlete.”

Millheim appreciates the time she has with her lacrosse teammates and Nadrah.

“She has always pushed me to be the best student, constantly being involved. That’s how I was growing up,” Millheim said. “At lacrosse, I want to contribute as much as possible, but I also want to make sure I am enjoying my time. There’s less pressure when you think of it that way. I just go out there and use it as a de-stressor.”

Nadrah said watching Millheim’s impact on the program has been fun to watch.

“Watching Shelby grow, lead, and flourish on this campus has filled my heart,” Nadrah said. “I knew early on that she would thrive at Marietta College and to see that come true and more has been so gratifying. Shelby’s shoes will be exceptionally tough to fill, but I am thankful I have had a player that made such an amazing impact.”