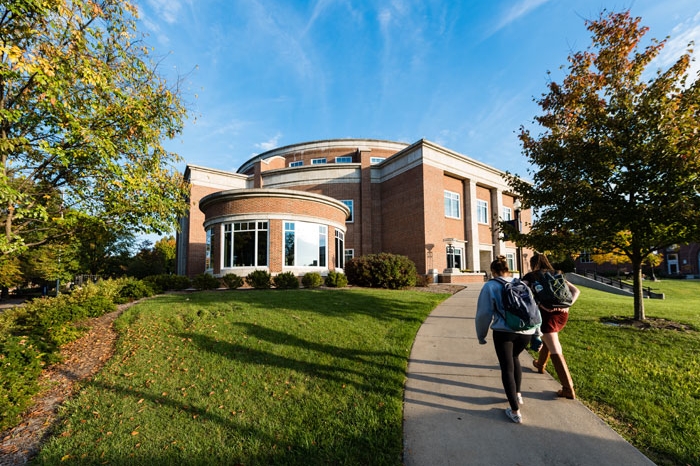 As campus settles into a new academic year, the leadership at Marietta College reflects on how well the 2016-17 year was for the Pioneer family.

“When I came on board a little more than a year ago, I saw a lot of opportunities to do great things, and I also met a lot of talented people on campus who were willing to make these things happen,” said President William N. Ruud.

As with most colleges and universities, Marietta put a strong focus on enrollment numbers. The Office of Enrollment Management welcomed a new vice president when Stephen Lazowski took the helm.

“It was projected that the incoming class would be 275, but I knew we could do better,” Lazowski said. “It takes a campus to recruit a class. The fact that we enrolled 312 new, full-time students this fall is a reflection of how dedicated the Admission staff and the entire campus is to growing the Pioneer community.”

“Our Admission team has been working hard to cover more ground in Ohio — particularly in Columbus and northeast Ohio — and in other areas of the country — including the New England states, Georgia, North Dakota, Michigan, West Virginia and Pennsylvania, and cities like Louisville, Baltimore, Nashville and Chicago,” Lazowski said. “We will continue to stake our claim in Ohio and in key states, making sure talented high school students hear about the great things happening at Marietta College and want to become Pioneers.”

To support these efforts, the College unveiled a new branding strategy in April that helps to create a consistent message to prospective students, alumni, donors and the community.

The College also made gains in its endowment and fundraising numbers during fiscal year 2016-17.

At the start of 2017, Michele Marra was named the Vice President for Administration and Finance, having served as Assistant Vice President since 2015.

Angela Anderson, Vice President for Advancement, said the 2016-17 fiscal year brought out the best in Marietta’s dedicated alumni and donor base.

“With their support, the College generated $10.5 million in cash and pledges,” she said. “Thanks to our wonderful alumni and friends, it has been the most successful year for Marietta College in the past five years.”

“Students, staff, faculty, alumni and friends of the College made it possible for us to surpass that goal, and we are so thankful for the continued support they show Marietta,” Anderson said.

Financial support of the College — like the $1 million gift from Donald G. ’81 and Leslie Straub Ritter ’85 to establish a music therapy program at Marietta — open up a tremendous amount of opportunities for today’s and tomorrow’s Pioneers.

In addition to the music therapy program, Marietta also strengthened its entrepreneurship program and added varsity golf and lacrosse for both men and women.

“We want to continue to offer the best professors, the best facilities and the best experiences at Marietta so we can attract and retain the best and the brightest students from all over the world,” Ruud says. “What we have done is we have empowered our entire campus to bring forth a Pioneer.”