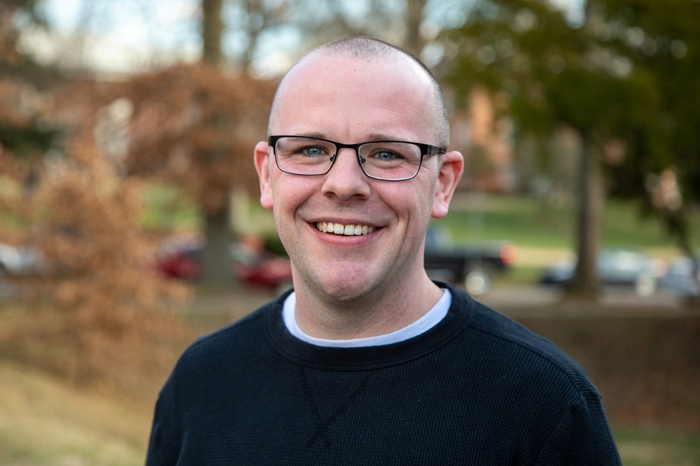 Dr. Michael Morgan ’10 is the 41st different person to be named a McCoy Professor at Marietta College since its inception in 1995.

What sets him apart is that he is the first Marietta graduate to receive the College’s most prestigious teaching honor.

“I understood as a student what the McCoy Professorship meant, and I took classes from McCoy Professors, which is why I didn’t think I was the typical choice for the honor,” said Morgan, who joined the Political Science faculty in 2018. “I always believed it goes to a more senior faculty member. Maybe I didn’t feel like I had paid my dues.”

He probably should have seen it coming, though.

“Dr. Morgan is an outstanding faculty member and incredibly gifted in the classroom,” said Dr. Janet Bland, Provost and Dean of the Faculty. “Having observed his teaching myself, it’s no mystery as to why his students speak so highly of the educational experience he provides.”

Katie Kitchen ’21, who is in her first year of law school at William & Mary, said Morgan was one of the most engaged professors she encountered during her time at Marietta.

“His dedication to his students was unmatched and he was always ready to offer support or come up with a solution to any challenge you may be facing,” Kitchen said. “Furthermore, Dr. Morgan was the Student Government Association Faculty Advisor during my junior year. In that role, he embodied what it means to be an advisor and mentor. He was not only instrumental in guiding the SGA body through decision-making processes, but he also facilitated one of the strongest relationships between SGA and Faculty Council that I was able to be part of during my time at Marietta College.”

Morgan also served as a mentor and supervisor for Kitchen during her Summer Investigative Studies project in 2020.

“One of the most impactful educational experiences I had at Marietta College was taking part in research that was supervised by Dr. Morgan,” she said. “I would not have had the opportunity to do undergraduate research without his willingness to give up part of his summer to advise my project and work with me weekly in order to help achieve my goals. … I am grateful for the time and energy Dr. Morgan dedicated to supporting my education and I am sure numerous current students and other members of The Long Blue Line share these sentiments.”

“I enjoy being able to share information that I find important and interesting with other people and then I try to have a meaningful conversation with why students,” he said. “There’s nothing fancy about what I do. I use the lecture to set up context so we can have a discussion. I’ll admit that I am tough but fair. In the end, though, I want to give my students every opportunity to succeed.”

Morgan’s interest in politics developed at an early age when he and his father, Rusty, discussed what they read in the newspaper.

“We always talked about politics, we even looked at the political cartoons,” Morgan said. “This is something I shared with him, but he passed away in 2015. By continuing to talk about politics in class, it’s a little reminder of those times I had with my dad.”

The late John G. ’35 and Jeanne McCoy established the four-year recognition plus stipend in 1993 as part of the McCoy Endowment for Teaching Excellence. After Catalano and Pate were identified as award contenders, a group of nationally recognized teachers working outside of the Marietta College community reviewed their portfolios and observed their classes. The award has been earned 47 times, and only four have earned the honor twice.

He joined the Marietta faculty in 2014 as a Visiting Assistant Professor in Political Science. He spent the next two years at Thiel College in Greenville, Pennsylvania, as a tenure-track faculty member. However, he could not turn down a tenure-track opportunity at his alma mater in 2018.

“When I came here as a visiting professor, I hadn’t finished my Ph.D. and I didn’t have my feet under me yet,” Morgan said. “The time away at Thiel was a great thing. I got to experience a different institution where I knew absolutely no one. I had the choice to come back, and I wanted to do that because I knew Marietta would be a good fit for me professionally and for my family.”

He also appreciated the mentorship he received from his colleagues.

“Mark Schaefer, Mike Tager and Grace Johnson have each provided an enormous amount of encouragement and sound advice during my time at the College,” Morgan said.

Morgan was a runner-up for the McCoy Professorship in 2019 and he wasn’t sure he wanted to try again.

“I was encouraged to do it again, but I decided not to do it right away,” he said. “I didn’t know if I had a chance. I was afraid that the committee members would observe on Zoom and not in person, and I don’t think I translate well on Zoom. So, I’m glad they were in person.”

Morgan said he was flattered to hear from former faculty members after they learned he received the honor.

“It still doesn’t quite feel real,” he said. “Being here as a student and knowing the quality of teachers who had the title of McCoy Professor … I would never put myself in that conversation. I think of what they did for me as a student, and I hope I can live up to that expectation.”

Morgan lives in Williamstown, West Virginia, with his wife, Lindsay and their two sons, Owen and Braeden.