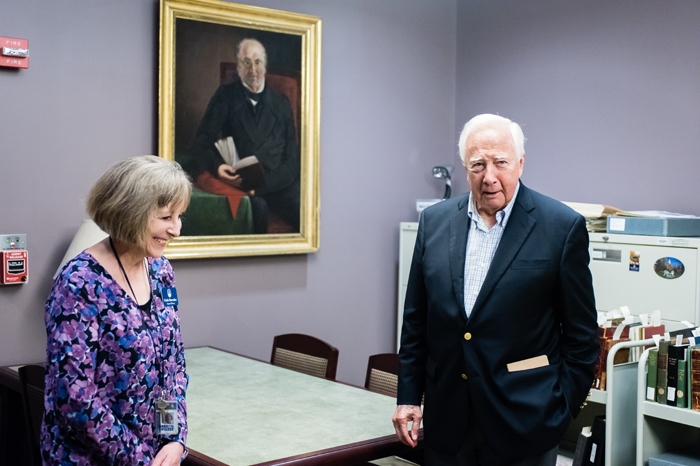 Historical author David McCullough admits he’s probably made more trips to Marietta over the past two years than he really needed to as he researched his upcoming book, “The Pioneers.”

“I’ve lost track of how many times I’ve been here, but I love coming back because the Special Collections are phenomenal and Linda Showalter (Special Collections Associate) is fantastic,” the two-time Pulitzer-Prize winning author said recently. “This may be my last research trip, but there’s also a chance we’ll be back in the fall.”

The book will look at the contributions and early struggles of people like the Rev. Dr. Manasseh Cutler, Rufus Putnam, Ephraim Cutler and Dr. Samuel Hildreth.

“Manasseh Cutler is a jewel in the crown of our country’s history,” McCullough said. “It is a very interesting and inspiring story that very few people know about it.”

McCullough is in the “homestretch” of completing the book, but he said there is still plenty of work to do before it is released in the spring of 2019.

“Every time someone writes a book like this, it has to be a joint effort,” he said. “Every time I come to Marietta, it’s not just me. We will have three or four other individuals contributing to the project in ways that I can’t.”

McCullough first learned about Cutler when he was asked to deliver the Commencement address at Ohio University during its bicentennial celebration in 2004. He continued to learn more about Cutler when he was asked to speak at Yale University’s conclusion to its seven-year Yale Tomorrow fundraising campaign. The focus of his talk was on three men affiliated with Yale College: Ezra Stiles, who was the president of Yale during the Revolutionary War; John Trumbull, the renowned Revolutionary War painter who donated works to Yale; and Manasseh Cutler.

“I wouldn’t have said this earlier in my career, but now I don’t care,” McCullough said. “I’ve never been drawn to a subject that I’ve known too much about. I want this to be an adventure, and put myself in their place. I always wanted to be a writer and the first rule is don’t tell me, show me. So, you have to put yourself in their shoes.”

He believes the book will show how these American pioneers fought every day for survival as they developed this new frontier.

“There was a great variety of people who came out here, and together they were all trying to survive,” McCullough said. “The state’s public education system was set up by men like Ephraim Cutler. He carried the banner for his father (Manasseh) when it came to no slavery in Ohio and public education.”

McCullough, who has written “The Great Bridge,” “1776,” “John Adams” and “The Wright Brothers,” will turn 85 on July 7. He is excited for the opportunity to share the story of these early settlers and has developed a passion for this region and Marietta College.

“I love this College and the town,” said McCullough, who was born and raised in Pittsburgh. “The longer I stay, the more I love it. I love the lay of the campus. I love the trees and that’s my river.”