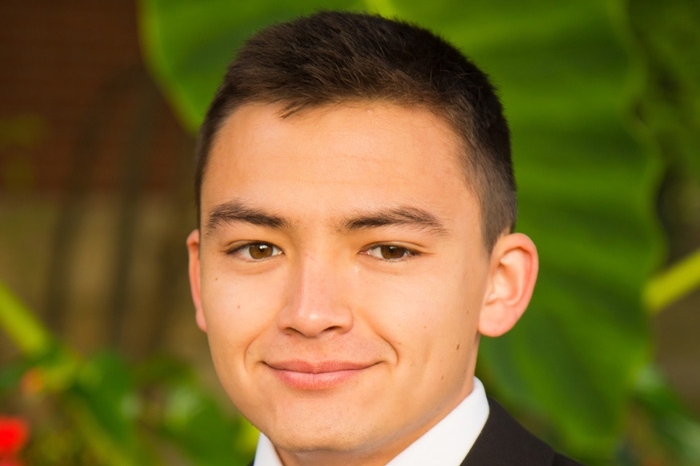 The late Dr. Cavendish McKay covered some complex and not very intuitive topics during his Quantum Mechanics II course.

"I was going to his office for help just about every other day, but he was always eager to help despite him knowing he would need to spend an hour with me to reach even the slightest breakthrough," Chih said. "As the semester progressed, I found myself on occasion trying to come up with any question whatsoever so that I could go visit him, which is very unlike the quiet, introverted person most people know me as. He was a terrific conversationalist who could talk about any topic in length and had wonderful insights to share. By the end of that semester, he was a great friend to me."

McKay, who taught at Marietta College for 12 years, passed away unexpectedly on June 11, 2019 - about a month after the spring semester had concluded. In the fall, family and friends established the Dr. Cavendish Q. McKay Award to honor his contributions to the program and to promote scholarship in physics at the College.

Chih, who graduated from the College Sunday, is the recipient of the first award, which is given to the outstanding graduating student in physics as determined by the Physics Department faculty.

"Throughout his four years as a physics major and astronomy minor at Marietta College, Matt has been a consistently high performer and we look forward to seeing what he does next," said Dr. Ann Bragg, Associated Professor of Physics.

Chih had an opportunity to participate in the Boulder Solar Alliance REU Program last summer and his capstone research has been a continuation of the project he worked on there.

"He and his adviser from Boulder are working on developing a new, faster method to detect solar flares," Bragg said. "Solar flare forecasting is important because flares can have many negative consequences for human technology if they hit the Earth; knowing about them sooner can help us mitigate their effects."

"It is a great honor to have been selected by the Physics Department to receive the inaugural Cavendish Q. McKay Award," he said. "Though, it must be known that the support of my close friends and fellow Physics graduates, who I have shared many memories with over the past years, made a tremendous impact on me and had an integral role in helping me get to this point. All of the Physics professors and staff challenged me to push myself and provided support when I would start to have doubts, which I have been greatly appreciative of."