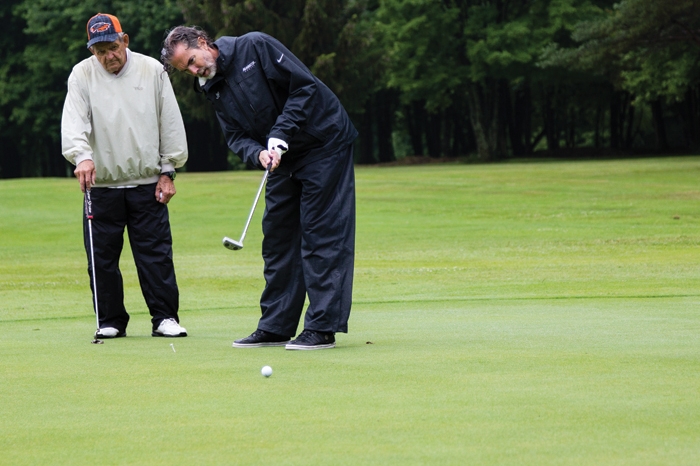 As a steady rain pelted the finely manicured grass outside, a small group of golfers gathered around a computer screen hoping to see some positive updates on the forecast. The other 75 or so, huddled inside the clubhouse at Whispering Pines Golf Club in Meadville, Pennsylvania, were debating if the fifth annual Pioneer Challenge Golf Outing would actually happen.

“The rain is going to break in about 30 minutes, so let’s head out and start taking photos so we’ll be ready,” bellows Bill Kingzett ’79, one of five alumni who organizes the outing each summer.

The rain actually never stopped, but it did let up for a while — albeit mixed in with some downpours. But it was just enough that each of the 16 teams got in at least eight holes, and some as many as 11. The outing was the second day of the two-day event. On Thursday, the weather cooperated and alumni and coaches participated in a golf skills competition, as well as attended a social event on the river. All of the events over the two days are how the programs earn points toward winning the Golden Musket Award.

“The golf part of this is important because we’re all very competitive,” says David Reese ’79, another organizer. “But this is about seeing old friends. This event has been priceless. You can’t put a number on it. We’ve got people back that I haven’t seen in 40 years. … I guarantee you if you let us make the decision on whether we could come back for another four years at Marietta … I’m packed, and I’ll move in again. It was the greatest four years of my life.”

Bob Gilmore ’76, who played soccer and ran track, made the trip from Elkton, Maryland, for the first time.

“This is a chance to get back together with some of your best friends,” he says. “It’s also a great fundraiser for the College, but the attraction is you can get involved at a low-key place, and we have a lot of fun.”

The Pioneer Challenge raised nearly $25,000 for the College’s Athletics Department, but the group also agreed it was time to start making a gift to the academic side. This year they donated $500 to the English Department.

“We wanted to reach over to academics,” says Reese, who played soccer and lacrosse. “We were all student-athletes. Most of us knew we wouldn’t be playing sports after college. Athletics brought us together, but we also went to class. We hope to get it up to $1,000 a year and pick a different academic department each year.”

Angela Anderson, Vice President for Advancement, says the Pioneer Challenge has grown into a fun and exciting event for a loyal group of former student-athletes.

“It is exciting to join the alumni, donors and coaches for this event each summer,” she says. “You see up close and personal the impact of The Long Blue Line and how an event like this can be delivered with a love of Marietta College as the driving force. I am very appreciative of the support we have received.”

The Challenge sort of started by accident.

When football coach Andy Waddle joined the College in 2013, Athletic Director Larry Hiser reached out to Kingzett and asked if he would meet with the new coach. They got together at Whispering Pines, along with Bill’s sister, Carol ’81, and helped get some funding and equipment for
the football program.

“It was only after this did I realize Bill wasn’t a former football player. He was a former soccer player and wrestler,” Hiser says. “I asked Bill why he met with Andy, and his response was perfect. He said, ‘Because you asked me to, and I like to support Marietta College however I can.’”

The next year, the Pioneer Challenge committee decided to make the event a competition between the football and soccer programs, and the winner receives the Golden Musket. This past summer, the event grew to include a challenge between every varsity sport at Marietta.

Soccer has won every year.

“I’m impressed with what Bill and Carol Kingzett, David Reese, John Stansfield and Michael Duggan have been able to do with this event,” Hiser says. “I was blown away again this year. …  You can see the enthusiasm that is generated about Marietta College athletics, and it has a positive impact on our coaching staff. The undying support of their alma mater is humbling.”

Bill Kingzett says the hard work is well worth it.

“I have a great committee,” he says. “We meet throughout the year, and we’ll have conference calls fairly regularly. It’s more about a reunion, a gathering of people, and they are doing it for a great cause — Marietta College, where we all have great memories of and still do. … What makes this event different from most typical golf events is that we had people fly in from California and multiple people from Texas, Florida, South Carolina and the East Coast. They’re flying in to see old friends and reconnect with the College, not because they want to play at Whispering Pines Golf Club in metropolitan Meadville.”

And even more memories were made on a very damp day in Pennsylvania.