Graduate school up next for Marietta’s Physics graduates 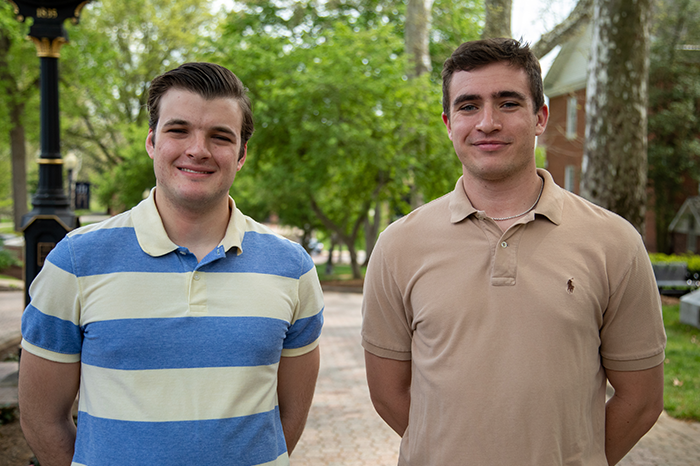 Considering the number of classes they have shared and the countless times they helped each other prepare for tests, it’s appropriate that Boyer followed Blackston onto the stage at the College’s graduation on Saturday, May 7th.

“I’m not sure what I want to do after graduation,” Boyer said. “I would like to eventually get a product design/development job, but I might start work on a Ph.D. I have no idea yet.”

Blackston, who served as a representative on the Student Government Association (SGA) and is a member of the Delta Tau Delta fraternity, knows what his summer plans are — working as a researcher at Ohio State.

“I will be researching materials for use in next-generation computers,” he said. “After graduate school, I would like to be a researcher at a private company or national laboratory.”

Dr. Dennis Kuhl, Professor of Physics, served as Blackstone’s advisor for both academics and capstone research.

“He is one of our Rickey Scholars, and he has done an excellent job in his coursework and his research,” Kuhl said. “He is diligent and thorough. He is very well prepared to succeed in graduate school.

The Physics Department recognized Blackston with the Cavendish Q. McKay Award, which is given to the outstanding graduating student in Physics. He was also named a Pioneer Scholar for scoring in the top 20 percent on the ETS Proficiency Exam.

“I feel that getting to have more one-on-one and small group interactions with my professors has helped me to establish a strong foundation of knowledge in physics that can be applied across a multitude of engineering and science disciplines,” Blackston said. “Having the opportunity to participate in in-depth research under the mentorship of a faculty advisor is also something that I feel has prepared me to pursue a Ph.D., which is a research-based degree. Lastly, I think that the liberal arts aspect of my degree from Marietta College helped me to become a better writer and communicator, which is also invaluable in the field of scientific research.”

Last year while trying to select a capstone topic, Boyer asked Dr. Ann Bragg if there were any projects she was interested in that Brag had not had time to pursue. She shared her idea about building a homemade radio telescope.

“Owen got excited about the idea due to his interests in both astronomy and engineering,” she said. “Throughout the project, I have been impressed with the independent work he has done in between our regular meetings. Owen has also performed consistently well in his physics coursework. I am sure he will be very successful at the University of Cincinnati.”

Boyer, who played soccer for four years, credits many people for helping him succeed as an undergraduate and preparing him for his future.

Both Blackston and Boyer gained valuable experience in the Research Experience for Undergraduates (REU) program.

Following his junior year, Blackston participated in the National Science Foundation-funded Thermal Management at Multiple Scales REU at Washington University in Saint Louis. He worked with Dr. Mark Meacham, a mechanical engineering professor, towards characterizing a device he had designed called an ultrasonic acoustic droplet generator.

At Marietta, Blackston also completed a capstone project where he got to install a new device called an Auger spectrometer and used this on a research project where he worked with Dr. Kuhl to study adsorbate induced resistivity in Au(111) thin films.

Boyer participated in a summer REU at Miami University during the summer of 2021. He worked on a project designing a removable thumb slug for a bowling ball.

“This slug can house an IMU that records data and reports it back to a computer for interpretation,” Boyer said. “This can tell us about the motion of the ball as it goes down the lane, as well as the mechanics of the bowler’s throw.”