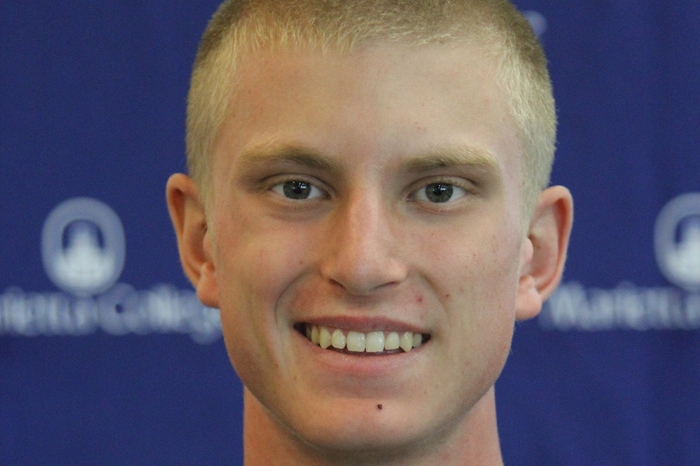 When it came to completing his senior capstone project, Ben Pratt ’20 (Tallmadge, Ohio) was up for a challenge.

The Physics major, who completed work on methanol-derived hydrogen fuel cells, was recognized by the science faculty with the 2020 Laura Scott Etter ’88 Prize.

“I feel very honored to receive the prestigious Laura Scott Etter Award and I am very thankful for all the contributions others have made to help me achieve this recognition,” Pratt said. “The encouragement, funding, and mentoring I received from the Physics and Chemistry departments gave me the opportunity to complete my capstone. Specifically, the constant encouragement and support from (Adam) Jacoby (Laboratory Coordinator) and Dr. Kuhl, who were my capstone advisors, and gave me the extra push I needed to succeed.”

The prize is awarded to a graduating senior who completes the most outstanding capstone research project in physical science and has the goal of continuing in graduate study. The selection is made by faculty from the departments of Chemistry, Environmental Engineering, Geology, and Physics.

“Ben did an outstanding job on his capstone research this year,” said Dr. Dennis Kuhl, Chair of the Physics Department. “He combined 3D printing, physics and chemistry to demonstrate a functioning methanol-based fuel cell. He exhibited a great deal of creativity, perseverance and independence.”

Pratt said he hopes his research will help provide an alternative to hydrocarbons.

“It is a hydrogen fuel that uses methanol and water as the fuel to create hydrogen, which is then used to produce electricity,” he said. “Methanol was used because it is safer to transport than hydrogen, which needs to be compressed. Methanol was also used as a fuel because it can be produced in a renewable manner unlike gasoline and natural gas. The fuel cell functions using simulated sunlight to vaporize methanol. The methanol vapor is converted into hydrogen gas which becomes ionized. The ionized gas is then oxidized, which creates an electrical potential difference and a current. Therefore, we were able to create a fuel cell that runs on mainly renewable materials and we foresee future applications in renewable energy originating from a methanol derived hydrogen fuel cell.”

Pratt and the other 177 graduates will participate in a virtual commencement ceremony at 1 p.m., Sunday, May 3rd. The College is planning to conduct an in-person, on-campus commencement in September.

“I came to Marietta for the opportunity to pursue what topics interested me, and I am very thankful Marietta did an exceptional job delivering on that promise,” Pratt said.