Freshmen win first round of PioBiz with ‘thrift shop’ idea 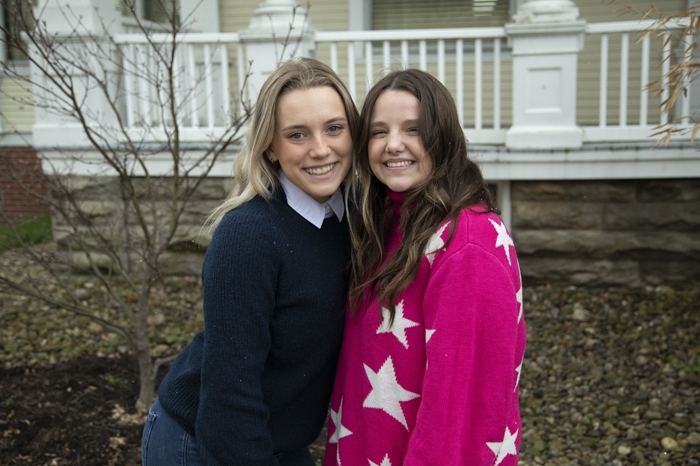 One month after winning the top spot in the first round of Marietta College’s PioBiz competition, Lilly Posti ’25 (Burgettstown, Pennsylvania) and Alexis Sommers ’25 (Nelsonville, Ohio) were already turning their idea into a reality.

Posti and Sommers received the $190 first-place award with their campus thrift shop idea they are calling “The Big Blue.” On April 6th, the duo conducted a thrifting event in the Andrews Hall Great Room.

“Lilly and I really like fashion and sustainability,” said Sommers, who is majoring in Entrepreneurship. “We came up with the idea of creating a campus thrift shop that would allow students to purchase — at a very low cost — clothes or items they might need.”

Posti, who is majoring in Communication Studies, added, “Big Blue supports students and accommodates students. If they really need something, then we want to provide it to them at cost or at no cost.”

Of course, it will take more time and more resources before their idea becomes fully operational, but the first-year students are enthused and encouraged.

“Being ranked high on the judge's list and the audience’s votes led to our success,” Posti said.

While the four judges — John Bokat ’07 (President of Compliance Services), Nikki Butler ’99 (Artist and Founder of Nikki Butler Design), Alex Hogan ’18 (Sales Manager with Malta Dynamics), and Faith Knutson (Director of Social Innovation & Entrepreneurship at Ohio University) — may not have placed the eventual winners in the top spot, the audience members backed Posti and Sommers with their “PioBiz Dollars.”

“A lot of people started talking about our idea on Yik Yak, and they were telling people to donate during our thrifting event,” Sommers said. “We’ve had other students reach out to us asking for our digital posters so they could share it with friends. We even had one guy at PioBiz tell us he wanted to help us get this started.”

Posti and Sommers plan to compete in the next two rounds of PioBiz, and they both agree the $10,000 grand prize would be a key part of getting their on-campus business off the ground sooner than anticipated.

“However, if we found the resources over the summer we could launch it in the fall,” Sommers said.

A total of eight groups presented during the first round of the competition that was held on March 3rd. The PioBiz Competition is supported in part by the Riverview Credit Union Mid-Ohio Valley Entrepreneurship Expo. Round 1 of the PioBiz Competition consists of identifying a problem that is worth solving and describing a new product or service that solves the problem. The proposed solution must potentially lead to the establishment of a for-profit or non-profit organization.

The other seven projects placed as follows: