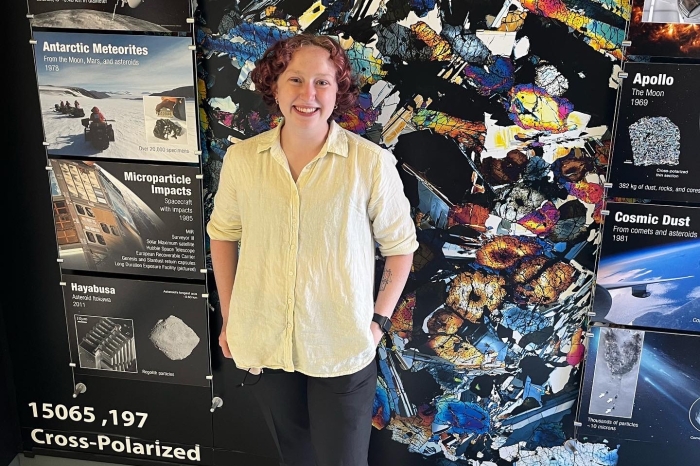 Emily Etheridge ’23 wants a career that moves beyond her interests in physics and science. A conversation with her first academic advisor, Associate Professor Dr. Ann Bragg, led her to become Marietta’s first Planetary Science major.

“I like physics and doing the math, but being able to do the hands-on aspect — being able to actually look at rather than abstractly think about things — is really exciting for me.”

After completing an Investigative Studies project last summer with her current advisor, Dr. Andrew Beck, who leads the Planetary Science program, she was ready to pursue a challenging and highly competitive internship with the Lunar and Planetary Institute. She applied last November and learned in March that she was one of 12 undergraduate students nationally selected for the 10-week internship. The Birdville, Rhode Island, native spent from June 6 through August 12 in Houston, Texas, with her team at LPI. She also served as a contractor at NASA’s Johnson Space Center.

“I am currently looking at the thermal history of enstatite chondrites. Enstatite chondrites are a highly-reduced (low in oxygen), sulfur-rich meteorite group that are the closest isotopic match to the composition of Earth,” Etheridge said. “More specifically, I am using the minerals plagioclase, clinopyroxene, and orthopyroxene to find out how the planetary bodies that these meteorites come from formed and cooled. They either formed as Earth did, with a distinct core, mantle, and crust, or they started to form this way and were broken apart before reforming because of its gravity.”

She is in the same building as the Astromaterials Research and Exploration Science group. Her internship paired her with mentor Dr. Brendan Anzures, and with co-mentors Dr. Francis McCubbin and Dr. Cyrena Goodrich.

Etheridge was excited to earn the internship, partly because the work that it entailed was in line with what she learned from her mineralogy and petrology courses at Marietta. Similar to Beck, her interests lie in meteorites and how they tell the story of the formation of the solar system.

“Dr. Beck has been super-helpful in the process of applying for and getting this internship,” she said. “He guided me last summer on my (Martian Moon Xploration Phobos moon) project and gave me the freedom to do the research my way so I could develop those skills on my own.”

At Marietta, Etheridge is involved in a wide variety of activities and academics. Though she started as a Physics major with an Astronomy minor, she changed to a Planetary Science major with a minor in GIS/GPS and a Certificate in Leadership Studies. She is also a member of Greek Life and is on the women’s lacrosse team.

“I really love being at a small school where I can do all my professional stuff and also be involved in a sorority, and being involved in athletics and leadership — I get a little bit of everything, which definitely helps you become more well-rounded.”