Rickey Scholar’s passion for football, physics being fulfilled at Marietta 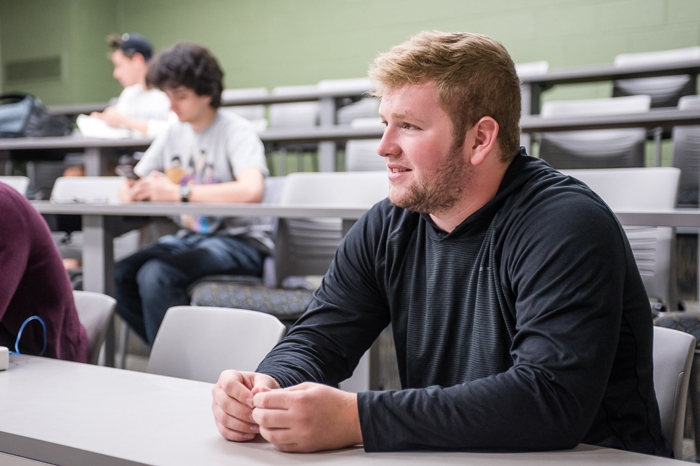 In high school, Patrick Taylor ’21 (Columbus, Ohio) just assumed he would go to college and study engineering. Then he took a physics class and his outlook changed.

“After taking a physics class during my senior year of high school, I just changed my mind,” said the Grandview Heights High School graduate. “I’ve always been a math person, and I enjoy that a lot more than writing a paper. When I do physics, I like to think and apply it to a real-life scenario critically.”

The Rickey Scholarships were established in 2000 by David M. Rickey ’78, Jan Nielsen and the J&D Family Foundation.

“It’s a pleasure to have Patrick in the Physics program,” said Dr. Dennis Kuhl, Chair of the Physics Department. “He is a great student who is well prepared to succeed. From the first time I met him, he told me he wants to major in physics and go on to do research. We’re thankful that the Rickey Scholarship will help make that possible for him.”

Taylor was being recruited to play football for the Pioneers and is currently on the roster as an offensive lineman. He said Marietta was near the top of his choices before he received the $25,000 annual scholarship.

“When I came to visit, I just fell in love with the feel of the small town. Where I’m from is a very small suburb and tight-knit inside a big city,” he said. “I like being in a close-knit community like Marietta, and I knew I would be at a very good school.”

Taylor also felt a connection with the football program.

In the end, though, receiving the Rickey Scholarship sealed the deal for Taylor.

“My parents told me to leave money out of the decision; but when I chose Marietta, they liked that decision," he said.

Taylor said his first semester is going well both inside the classroom and on the field, but he acknowledges that both are a bigger time commitment than he was accustomed to in high school.

“I’ve always dreamed of playing football in college, but I’m realizing now how much more time I spend in the library than I did in high school,” he said. “I’m just trying to develop good study habits because both football and physics are a huge time commitment."

Taylor said he is also adjusting to the educational balance that comes with being at a liberal arts college.

“I’m one of those people who likes to know that I have to go to class, go to football and have time to do my homework. Being so busy all of the time helps me get my work done, and I can’t procrastinate,” he said. “I’ll admit, when I have to write about the Odyssey, it still feels like busy work. But that’s something that I’m going to have to learn and get better at moving forward. It’s what’s great about a liberal arts education.”

Taylor is the son of Mandy and Kevin Taylor, and the brother of Morgan, Katherine and Matthew.