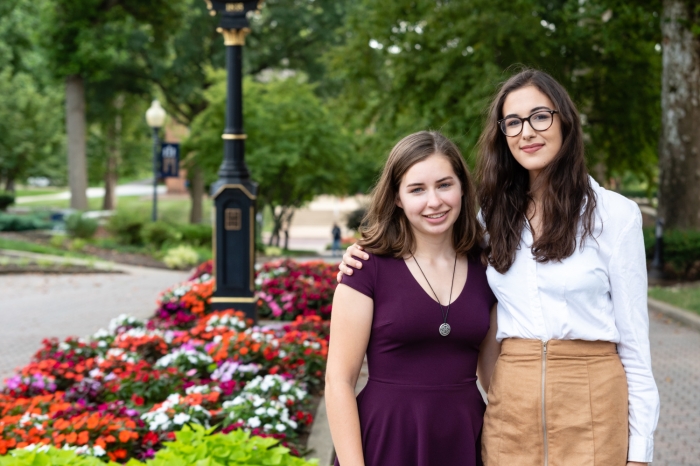 Margaret Russell ’23 (Chesapeake, Virginia) likes efficiency. It doesn’t have to be her way, she says, as long as it’s more efficient.

“I can’t stand inefficiency,” she says. “I like problem solving.”

The freshman Physics major is one of two Rickey Scholarship recipients. The full-tuition scholarship is awarded to qualified students majoring in physics for their four years at Marietta College. The Rickey Scholarship was established in 2000 by David M. Rickey ’78, Jan Nielsen and the J&D Foundation.

Russell plans to continue her education, with a goal of earning a master’s degree in a field like mechanical engineering.

“I’d like to help the environment in some way,” she said.

Russell said she was first exposed to physics in high school. Something just clicked, she said.

“I guess it’s the way my brain works, or maybe the teacher I had; he was a fantastic high school teacher who cared about his students.”

As a McDonough Leadership scholar, Russell arrived on campus early to go through EXCEL orientation. She said she was nervous about leaving friends and family to come to Marietta College, but soon found fellow freshmen in the Leadership program who felt like family.

“I never thought I had what it takes to be a leader, but I learned it’s about skills — like learning to work well in a group — there are different ways to lead,” she said.

Her fellow Rickey Scholar is also a member of the McDonough Leadership Program. Lily Daneshmand ’23 (Willoughby, Ohio) said she cried when she learned she would receive the scholarship.

“I was panicking about how to pay for college and when I got the call I was overcome with joy,” she said.

Her goal is to major in physics and eventually get a Ph.D. in astrophysics. She hopes to work for the U.S. Air Force or NASA.

Her grandfather, a physicist, has been a big influence on her.

“Growing up I always heard him talk about dark matter and dark energy. It’s a mystery (but) once I understood it and got a grasp of the theories, I knew it was something I wanted to learn about.”

Daneshmand described dark matter as “extra” gravity that can’t be explained or accounted for; scientists know it exists but can’t see the source.

“I really look up to my grandparents — they are two of the most intelligent people I know,” she said. “They exposed me to a world others weren’t exposed to.”

The Willoughby, Ohio, native said she wasn’t set on attending Marietta College, but after getting an email that her application fee would be waived and being contacted about the scholarship, she came to campus and met professors and others who made her feel welcome.

“They remembered my name,” she said. “At a small school they really get to know you.”

“There’s a requirement to fulfill service hours and that’s a chance to get involved in the community; to meet and connect with people,” she said.