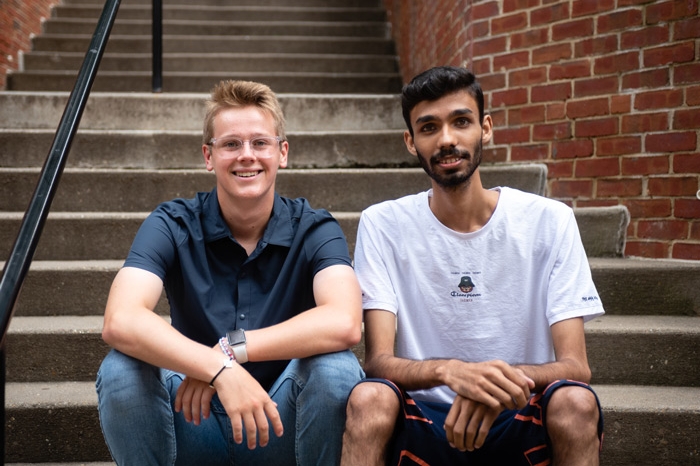 Colin Walters’ love for science began at age 13 when his aunt took him to see a lecture by astrophysicist Neil deGrasse Tyson.

Now a freshman at Marietta College, Walters ’25 (Hilliard, Ohio) is taking the first steps to reach his goal of working for a major aerospace company, thanks to the Rickey Scholarship.

The Rickey Scholarship in Physics is a full-tuition scholarship renewable up to four years that’s awarded to students majoring in Physics. Recipients must not only demonstrate academic excellence but also plan to pursue graduate school and a career in science or technology.

The scholarship was established by David M. Rickey ’78, Jan Nielsen and the J&D Family Foundation. Walters, along with Aditya Shah ’25 (Birgunj, Nepal), are this year’s recipients.

For Walters, majoring in Physics will help him learn how to tackle complex problems and work with a team. He’s confident those skills, along with his accompanying mathematics major, will set him up to work for SpaceX or NASA someday, or to work with rocket engines or materials at a private military contractor.

In the meantime, Walters hopes to spend a summer studying dark matter and dark energy through a research grant — a perk that Rickey Scholars automatically are eligible to receive.

“I would absolutely love to dive deep into this topic and try to grasp how it affects our worlds,” Walters said.

For this year’s other Rickey Scholar, Aditya Shah, earning the scholarship afforded him the opportunity to come to America for college. When Shah, who grew up in Nepal, told his parents he wanted to continue his post-high school studies in the United States, they told him he had to find a way to pay for it.

Shah has a passion for physics because, regardless of where he lives, the subject allows him to discover information that can help the whole world. After he graduates from Marietta, he plans to earn his Ph.D. and continue his personal research into the realms of electromagnetic and quantum physics.

He also is thinking about returning to Nepal to teach and encourage the next generation of scientists by bringing a more practical — and fun — approach to the subject.

As he adjusts to a new language and a new culture, Shah is thankful for the personalized experience Marietta offers. Nepal and the United States are “complete opposites,” he said, and being at a small college gives him an advantage.

Ultimately, his first semester at Marietta is the realization of a long-held dream.