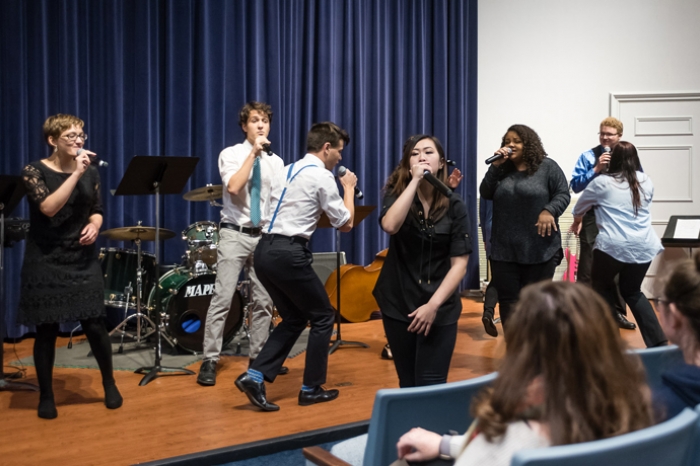 Marietta College’s Jazz Combo and Floodstage will team up for a spring Jazz and A Capella concert — Can’t Stop that Feeling! — at 7:30 p.m., Thursday, April 19th.

The performance, which is free and open to the public, will be held at the Alma McDonough Auditorium.

“This concert is a collaboration between the two ensembles,” said Dr. Jay Dougherty, Director of Choral Activities. “We’re excited to share the stage with the jazz combo once again. I think the music works well together. In fact, for the third concert in a row, the two ensembles will also close the concert with a combined number.”

“Jordan is a master of jazz. His energy, passion, and musicianship are evident when you see and hear the jazz combo perform,” Dougherty said. “Floodstage is Marietta College’s contemporary a cappella ensemble. We sing familiar modern music, all unaccompanied.”

Floodstage will conduct a tour around Ohio for a few weeks in May. “We’re excited to share the music of Marietta College with potential high school students around the state,” Dougherty said.