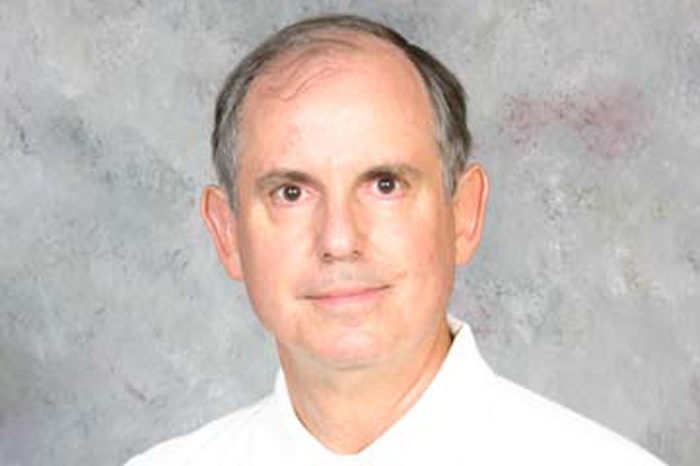 During the 1976-77 academic year, Dr. George Whitmore “Whit” Hancock Jr. was granted a sabbatical to study the Science of Creative Intelligence — having a focus on Transcendental Meditation — in Switzerland for six months, with the remainder of his time being spent at Maharishi International University in Iowa to develop a Physics course on videotape.

Born on April 25, 1942, in Richmond, Virginia, to parents George W. and Page Turner Hancock, he attended Newport News (Virginia) High School, before enrolling at the University of Virginia. He earned Phi Beta Kappa honors with a Bachelor of Arts in Physics in 1963 and continued his studies working with a team of scientists on a project regarding nuclear energy research at the university.

He was 25 years old in 1968 when he was hired as an instructor of Physics at Marietta. Earning his doctorate in 1973 and being elevated to Assistant Professor, Dr. Hancock was a meticulous scientist committed to the education of his students. His formal, precise and academically demanding presence in the classroom was often intimidating to students early on in his career, but his sabbatical to better understand Transcendental Meditation helped soften his interactions — “It made him a better teacher,” said Professor Emeritus Professor of Physics Dr. Lester Anderson ’55, who spent nearly his entire career at Marietta with Dr. Hancock as his colleague. “He also taught some courses unofficially on campus to teach non-credit courses on TM as a service to students. He did a lot of counseling, in a sense, and, as a result, he came out of his perfectionist, single-focus quite a lot.”

On August 9, 1980, he married Carole Wylie ’75, a local teacher. Dr. Carole Hancock later transitioned to higher education, initially teaching at Washington County Technical Center (later becoming Washington State Community College), and, in 2011, she returned to her alma mater to teach in the Education Department. She retired from full-time teaching at Marietta at the end of the 2017-18 academic year and was granted Emerita status. For decades, the Hancocks were dependable fixtures during campus events — whether it was as spectators at athletic competitions or during Homecoming.

Within the Physics Department during the 1970s and ’80s, everything was decided in consort — from priorities within the major to who taught courses. “Nobody owned a course in the department,” Anderson said. “Every course had to be taught shared back-and-forth, so no one owned a particular viewpoint and approach to any course, advanced or beginning. We also had the philosophy that the most important courses of all are the introductory course for freshman/sophomore beginners. Whit loved teaching advanced courses — as he was the most meticulous, perhaps, we’ve ever had — but he really was wedded to the idea that you’ve got to get students started right and that teaching the beginner was the most challenging job of all and required the best.”

Upon his return from his sabbatical in 1977, Dr. Hancock was named Chair of the Physics Department — a start of the behind-the-scenes work he pursued throughout his tenure at Marietta.

“Whit as a scientist, of course he was primarily a teacher when he was here — and that is by his own description — but you could tell what sort of a scientist he was by the way that he taught and the way that he approached teaching,” said Dr. Dennis Kuhl, Professor and Chair of the Physics Department. “He documented things more carefully than anyone I have ever known, and that just reflected an attention to detail and precision with which he approached science and physics.”

In addition to teaching and mentoring students, he was one of three members of the original faculty committee that initiated the development of the McDonough Leadership Program, was a charter member of the committee that developed and oversaw the Master of Arts in Liberal Learning degree program, led the charge to develop the Environmental Science Program and the Industrial Engineering Program, and, after he retired, he was instrumental in getting the Phi Beta Kappa clock funded and installed on The Christy Mall. In 1990, he was elevated to the rank of full Professor.

“I think the record shows that I have often been ‘where the action is’ in terms of committee activities,” Professor Hancock wrote to President Larry Wilson in 1995 in response to an inquiry about his interests. “I believe I have made significant (though mostly publicly unrecognized) contributions to the growth and development of Marietta College over the years. I view myself as a positive person who enjoys working behind the scenes to contribute ideas and to try to facilitate forward progress.”

Former student Chuck Cooper ’89, who developed friendships with Professors Hancock and Anderson after his graduation, recalled his former professor as one who led by example and who was always immaculately dressed.

“No Professor was more prepared for lecture, everything had an order, and you knew exactly where you stood,” Cooper said. “I was privileged to know him, as a student and later as a friend. He and Carole were an incredible resource when my daughter Anna Ruth attended Marietta College. They greatly contributed to her success in realizing her dream of becoming a veterinarian. Whit had many success stories with students. One at the top of the list was David Rickey. He will be missed.”

“He was the most structured, organized and supportive faculty person I have ever known,” Rickey said. “Physics can be a tough subject to grasp, but Whit made it as straightforward as he possibly could. He was always happy to answer questions or see me during office hours.”

After donating the largest single gift to the College in 2000, resulting in the revitalization of the math and science programs and the construction of the Rickey Science Center, Mr. Rickey and his wife, Brenda, announced in November 2007 that a new planetarium would be built as an annex to the Rickey Science Center and its name would honor his former professors, Whit Hancock and Lester Anderson.

“Brenda and I enjoyed seeing Whit and Carole whenever we got back to campus,” Dave Rickey said. “And Whit would write detailed emails on occasion to keep us appraised of what was happening at the College. And we were so happy to be able to help build AHP (Anderson Hancock Planetarium) and make him a namesake on the beautiful facility.”

Though Professor Hancock had announced his retirement in 2000, his impact on his students has remained on full display.

“The fact that the Physics program today has the resources to provide a first-class physics education is due in no small part to the job that Whit Hancock did as a professor of physics,” Kuhl said. “For that, I am very grateful. … But the irony is not lost on me that, through most of his career here, Whit did not have adequate resources to do the things he would have liked to do as a physics professor, but the impact that he had on his students, and in particular David Rickey, helped ensure the generation of professors after him would have those resources.”

Professor Hancock passed away on Wednesday, July 14, 2021, in Marietta after a lengthy illness. He was survived by his wife of 40-plus years.

In 2000, Professor Hancock informed then-Provost Eugene Lubot of his decision to retire, prompting Lubot to send him a very personal message expressing his admiration.

“During your years at Marietta you have touched the lives of countless students and colleagues,” Lubot wrote. “This should be a great source of pride and satisfaction to you. That’s one of the best things about devoting your life to teaching. It means that you influence many people who go on to influence others. It’s a form of immortality.”