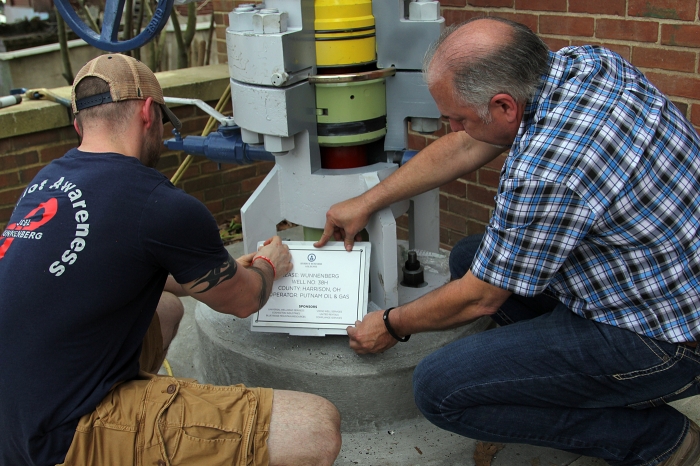 “Thank you for coming,” he said.

“Thank you for everything,” Kim Wunnenberg responded.

Well over a year ago, Krieg had an idea to have a wellhead donated and installed on Marietta College’s campus to help current petroleum engineering students like himself better understand the components of a modern drilling site. The president of Marietta’s student-run Energy Business Alliance became more driven to see the idea become a reality after the death of his fellow petroleum engineering and McDonough Leadership classmate Joel Wunnenberg ’20 in March 2017. Krieg and fellow EBA members set out to secure industry sponsors for equipment donations and help with installation of a wellhead in front of Brown Petroleum & Geology Building.

On Saturday, the Marietta College community and Joel’s loved ones gathered in front of the Brown Building to install and dedicate the Wunnenberg 38H, a Marcellus-style wellhead. President William N. Ruud welcomed Joel’s family and friends to the ceremony and expressed gratitude for the hard work the students undertook to make the academic learning site possible.

A wellhead is where the wellbore meets the ground surface, Krieg said, and is what the hydrocarbons are produced through and serves as the intermediary between the well and the production equipment.

“Having this on campus will not only be symbolic of the transition that our industry is seeing from conventional wells to unconventional wells, but it will also be split-sectioned so that students will be able to see the internal components — something that is pretty rare,” Krieg said. “A wellhead is quite complex and has many pressure barriers and seals, as well as structurally supports pipe in the well. There are many parts internally that you cannot see when on a well site, so having this display will help students be able to better understand the critical components of a wellhead.”

“Universal Wellhead Services is the largest sponsor, and the organizer of the building and assembly of our wellhead,” Krieg said, adding that the College paid to reinforce the foundation under the wellhead.

“This is all student-driven,” Ebenhack said. “They came up with the idea and the concepts, and they wheeled in donations to make this happen.”

Ebenhack was also impressed with how the installation ceremony was in line with how an actual job site is run by including a pre-installation job safety assessment (JSA) meeting led by safety officials from Compliance Services and Universal Wellhead Services.

“I was contacted by Derek and Alex (Hofmeier) about being a part of this project,” said Harry Berry, Vice President and Regional Manager for Universal Wellhead Services. “When we learned about Joel and that his classmates wanted to honor his memory, it made us really want to be a part of this project.”

“It’s nice that the College did something for him, but there’s a reason for this and I would do anything in the world for it to not be this way,” Brandon said. He described his brother as being as patient as a saint but with a never-ending work ethic. “I was his first football coach — when he was first starting out in flag football. I remember telling him he had to be able to catch the ball and do something with it. Two years later he was the best kid in the league. He willed himself and worked to be the best.”

“This is a great reminder of Joel and the life that he lived,” said Marietta College’s head football coach Andy Waddle. “The fact that we are able to honor and memorialize him on campus is something that will far outlast the standard for years. Generations will get to see and use the wellhead, and learn of the impact that Joel had on the Marietta College campus.”

In addition to Joel’s Marietta College football teammates, his Springdale High School football teammates and classmates made the trek to campus from Springdale, Pennsylvania, and other locales. Stephanie Manning, Dom Varrato, Mara Tyree, Eric Lovic, Mario Liberati and several other Springdale natives shared similar stories of Joel’s kindness, hard work and passion for petroleum engineering, and were happy that their friend’s alma mater chose to honor him.

“I understand why Joel picked Marietta College,” Kim Wunnenberg said. “It’s not just a college campus — it’s home and it’s family, and it will be for life.”