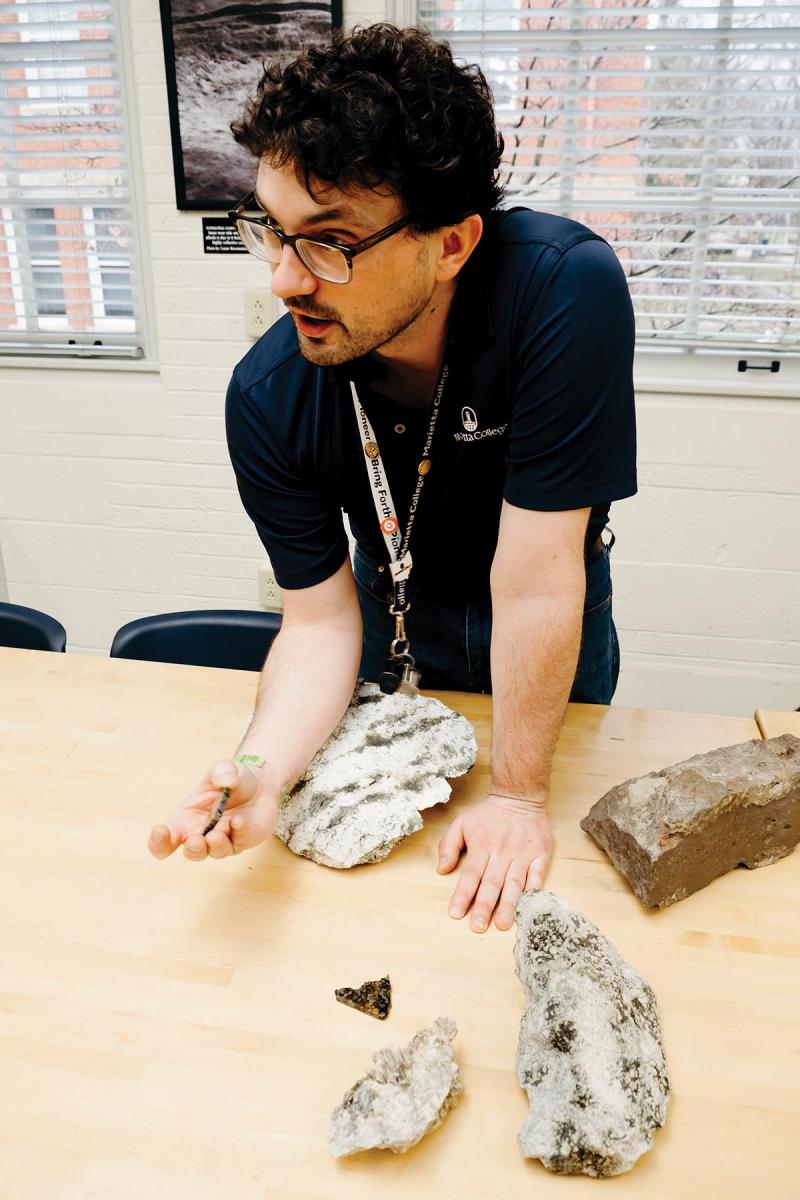 At its closest, Mars is about 36 million miles from Earth and southwest Ohio, where Dr. Andrew Beck lived and played in a creek as a boy. But it’s there on his family’s farm that his interest in nature and rocks — and space — was born, and that curiosity has taken him to heights he couldn’t have imagined then.

Beck, who joined Marietta’s faculty this past fall, is a recognized expert and researcher in the field of meteoritics and terrestrial geology. He teaches Mineralogy and Petrology and plans to develop courses in Planetary Geology and Geologic Field Mapping.

“My interest started when I took a course in geology,” he says. He was an undergraduate Philosophy major at Albion College, a small liberal arts school. “Once I exhausted all courses available in geology, I thought it would be cool to learn about geology on other planets.”

He went on to get a doctorate in Geology and Planetary Science at the University of Tennessee. After graduate school, Beck joined the Smithsonian National Museum of Natural History as a member of NASA’s Dawn at Vesta Science Team, conducted meteorite research, and was a member of the 2012 Antarctic Search for Meteorites Team. He accepted a position at the Johns Hopkins Applied Physics Laboratory in 2014, where he continued meteorite research, assisted in nuclear and X-ray spectrometer instrument development for planetary exploration, and was a science team member on several NASA mission proposals. Beck is a Science Team member on MEGANE, a nuclear spectrometer set to arrive at the Martian moon Phobos on JAXA’s Martian Moons eXploration mission (MMX) in the mid-2020s.

Beck hopes to get his students involved in his exploration efforts too. He expects to have his students work with him on the MMX mission. And he hopes he can help students get internships at the Johns Hopkins Applied Physics Lab, which continues to be a hotbed for NASA mission and instrument development.

“I enjoy the exploration aspect,” he says. “I like trying to understand why things are the way they are in the natural world. Why does the Ohio River flow the way it flows in Marietta? Why are there volcanoes on the West Coast [of the U.S.] but not the East? These sorts of questions drive my interest in the field.

“I want to know why planets are the way they are; and through our exploration, we answer those questions.”