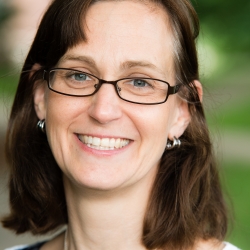 Christy joined Marietta College in July 2007, which brought her back to Ohio after living seven years along the East Coast and Texas. She holds a B.A. in Sociology and Spanish from Miami University in Oxford, Ohio. Immediately following graduation, she joined Americorps* National Civilian Community Corps (NCCC) and was based out of Washington D.C. She traveled throughout the United States and completed 3500 hours of community service during her two year NCCC commitment. After teaching English to foreigners in Boston, she completed her M.A. in International Education from the School for International Training in Brattleboro, Vermont (now SIT Graduate Institute).

Her interest in things international began when her family hosted a student from Spain for a summer. In between high school and the start of college, Christy spent one year in Ecuador as a high school exchange student with AFS. During that time, she got a first-hand look at life in another culture. She continued to study the Spanish language in college, and completed her Spanish degree while studying in Salamanca, Spain during her junior year. She's been fortunate to travel throughout much of the globe and has recently visited China, Ghana, Australia, and Italy.

She encourages all students to think about studying abroad and is pleased that Marietta College supports the idea of Internationalization as a core value.