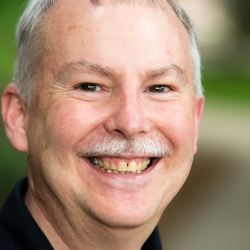 Dave McShaffrey is Professor of Biology, Environmental Science and Leadership. He received his BS in Biology and his MS in Aquatic Biology from the University of Akron, and his PhD in Entomology from Purdue University. He has been at Marietta since 1989.

His research interests have included use of aquatic macroinvertebrates in determining water quality, distribution of Chironomidae and Odonata, hydrodynamics of aquatic insects, functional morphology of mayfly mouthparts, forensic entomology, UV fluorescence in terrestrial invertebrates and color change in insects and amphibians. He was a member of the Ohio Odonata Survey and was co-editor and chapter author for 5 chapters of its 2002 book, The Dragonflies and Damselflies of Ohio. He is currently working on an all-taxa biotic inventory (ATBI) of Marietta College’s Beiser Field Station, which he also serves as director.

He currently serves on the Executive Board of the Ohio Biological Survey and has served as president of the Ohio Odonata Survey and on the board of the Marietta Natural History Society. He has been co-leader on 8 trips to Central America where he has cumulatively spent over 6 months with students on study trips, and has co-led several trips to the western United States. His photographs have appeared in numerous books and field guides. He lives with his wife Ann and his dog Canyon; Canyon, a therapy dog, often comes to school and to class.