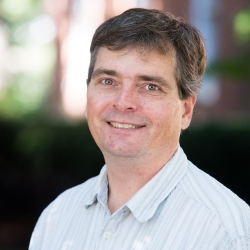 After undergraduate work at Marietta College, Dr. Jeffery got his MS at Bowling Green State University in geology focusing on taxonomy and paleoecology. While working there, he spent the summers as a Paleontology Intern at Badlands National Park in South Dakota. Half of his time was spent as an interpretive National Park Ranger and the rest was used to explore the park's paleontology. During that time, he studied the distribution of fossil lake limestone and fossil gastropods within the national park. Dr. Jeffery would go on to work on his Ph.D. in stratigraphy, paleontology, and paleoecology at Texas A&M University. During these summers, Jeffery once again did interpretive Park Ranger work, this time for Guadalupe Mountains National Park.

After post-doctoral work on Mississippian reefs and paleontology, he began a career as a petroleum geologist for ARCO, primarily exploring production in basins from the West Texas Permian Basin throughout the Rocky Mountains. Dr. Jeffery then joined BP Amoco where he focused on gas field production in Basins of New Mexico and Colorado. Here at Marietta College since 2003, he has researched numerous topics independently and in collaboration with MC students. Some of his research interests are Mississippian carbonates, Silurian reefs, and sandstone diagenesis. Jeffery has also been involved in Marietta's dinosaur dig in Utah for which he and the group have published several papers. He is currently focusing on the paleontology, fossil algae, and sequence stratigraphy of Silurian reefs exposed in caves in Virginia.