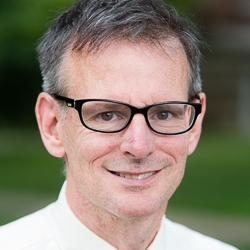 Dr. Torbett is the author of Theology and Slavery: Charles Hodge and Horace Bushnell (Mercer University Press, 2006) and editor of The Autobiography of Daniel Parker, Frontier Universalist (Ohio University Press, 2020). He has also published articles on the use of drama and debate in teaching biblical studies.

His current writing project is a textbook, tentatively titled Five Big Religions, More Big Questions. Dr. Torbett received a Bachelor of Fine Arts from New York University in 1987, a Master of Divinity from Andover Newton Theological School in 1992, and a Ph.D. from Union Theological Seminary in Virginia in 2002. He is an ordained minister in the United Church of Christ. His hobbies include racewalking and music.

With his family, Dr. Torbett has created a number of humorous musical videos on topics in European history, including “Lay Investiture Swings,” which has received thousands of views and has been used by teachers in high school and college classrooms.

Recent Publications:
The Autobiography of Daniel Parker, Frontier Universalist (December 2020); Theology and Slavery: Charles Hodge and Horace Bushnell (book, Mercer University Press); “I Did Not Wash My Feet with that Woman: Using Drama to Teach the Hebrew Bible” article, Teaching Theology and Religion (13:4, 2010).