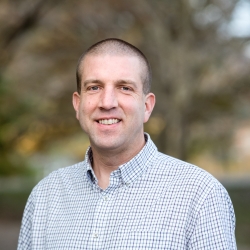 Dr. Pate, who completed post-doctoral work at Kansas State University in 2000-01, was named a McCoy Professor, the highest teaching honor at Marietta College, in 2006 and again in 2018. He received the Alpha Lambda Delta Academic Excellence in Teaching Award in 2011, and was presented with the Outstanding Faculty Award by Student Senate in 2017. He has also earned Advising (2012) and Freshman Advising (2014) Awards. He became a tenured faculty member in the fall of 2006.

Dr. Pate is very interested in creative pedagogical approaches to teaching Organic Chemistry. He has developed numerous guided-inquiry ("discovery") experiments for his lab courses that simulate research, in stark contrast to the “cookbook” approach that is traditionally employed to teach these labs. He also utilizes a flipped classroom approach to teaching his Organic Chemistry lecture courses that involves content delivery via video (outside of the classroom), with time inside the classroom spent assisting students with problem-solving. Dr. Pate spent a Spring 2015 sabbatical creating the 70-plus videos used in his two Organic Chemistry courses.

Dr. Pate provides many service contributions to the College and region, including being a multi-year member of the college’s Assessment, Pedagogy, and Academic Standards Committees. He has Chaired both the Assessment Committee (two times) and the Academic Standards Committee (2016). He served as Director of the District 9 Science Fair from 2003-09 and has been an event leader for the regional Science Olympiad since 2012.

Dr. Pate was elected as a Councilor for the Upper Ohio Valley Section of the American Chemical Society in 2008. He was appointed to the Membership Affairs Committee (MAC) of the American Chemical Society in 2012 and was elected to Chair of the Categories and Dues Sub-committee of MAC in 2016. He travels to meetings around the country twice a year to serve in these national governance meetings.

Dr. Pate and his wife, Michelle have three children (Kaylee, Justin, and Ashlee). They reside in Vincent, Ohio. Dr. Pate's outside activities and hobbies include church, camping, hiking, running, and being a dad.