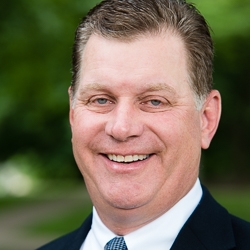 Mr. Hiser joined Marietta College in March of 2008. He directs all functions related to intercollegiate athletics, oversees an NCAA Division III athletics program with 22 varsity sports (11 for both men and women) and the College’s recreation center.

Prior to joining Marietta, Mr. Hiser was the Director of Athletics and Head Baseball Coach at Endicott College in Beverly, Mass., from 1995-2008. He played a critical role in transforming Endicott College from a two-year, women's college to a selective, co-educational four-year college. Under his watch the Gulls won 37 conference championships and participated in 47 NCAA or ECAC tournaments. Endicott also successfully launched new programs for equestrian, lacrosse and football, while improving the facilities that now rank among the finest in New England.

He earned a Bachelor of Arts in English from Ohio Northern University in 1987, where he was an all-conference shortstop on the Polar Bears baseball team. He went on to earn a Master of Science in Physical Education/Athletic Administration from Springfield College in Massachusetts, where he was a graduate assistant. He joined Endicott College in the fall of 1994 as the Gulls first baseball coach.

The Oregon, Ohio, native is married to the former Susan Chick. The couple has two children, Dan and Allison.