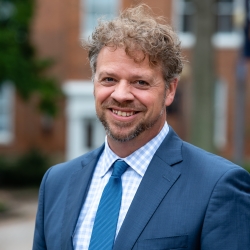 Michael Moffitt is a Professor of Law and holds the Philip H. Knight Chair in Law at the University of Oregon.

Professor Moffitt previously served for six years as the Dean of the University of Oregon School of Law. During his time as Dean, the law school quadrupled its student scholarships, enrolled the most diverse student body in the school’s history, developed an innovative undergraduate legal studies program, more than doubled its philanthropic support, and launched a satellite campus in Portland, Oregon.

Prior to serving as Dean, Professor Moffitt was the Associate Dean for Academic Affairs, and served as the Associate Director of Oregon’s nationally-ranked Appropriate Dispute Resolution Center. He taught Negotiation, Dispute Resolution, Arbitration, Advanced Negotiation, the Law of Settlement, and Civil Procedure. Prior to joining the Oregon faculty, he was a Lecturer on Law at Harvard Law School, a visiting professor at the Ohio State University College of Law, and served as the Clinical Supervisor of the Harvard Mediation Program. Immediately after law school, he served as a law clerk to United States District Judge Ann Aldrich. Professor Moffitt spent several years as a consultant with Conflict Management Group, designing and delivering mediation services, negotiation coaching, and training workshops around the world. His clients have ranged from senior judges to tribal leaders, from unionized prison guards to accountants, from railroad officials to major law firms, from multinational corporations to diplomatic academy trainees.

The Provost of the University of Oregon named Professor Moffitt as one of the first University recipients of the Oregon Fund for Faculty Excellence Awards. The Oregon law school faculty awarded him with the law school’s Orlando J. Hollis Faculty Teaching Award. He is also the recipient of the University’s Ersted Award for Distinguished Teaching.

A graduate of Marietta College and Harvard Law School, he is a devoted but mediocre snowboarder, an aggressive tennis player, and the happily exhausted parent of two teenage daughters.