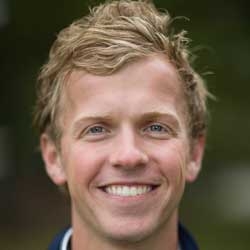 Tom Arison serves as both the men's and women's golf coach at Marietta. In 2016, he helped resurrect both of Marietta's golf programs after a 15-year hiatus. The Pioneers fielded a varsity men’s golf team from 1936-2002 and a varsity women’s team from 2001-02. Both teams started competing again in the 2017-18 school year.

Arison came to Marietta after serving as the head boy’s golf coach at Copley High School near his hometown of Fairlawn, Ohio.  He also served as the interim head men’s golf coach at McKendree University, an NCAA Division II member of the Great Lakes Valley Conference. Arison spent two years with the Bearcats in a variety of roles.

He started at McKendree as a graduate assistant for game management before moving into an assistant coaching position in the fall of 2015. In addition, Arison served as an assistant golf professional at the Bearcats’ on campus golf course, The Hills Golf Club.

Always working to promote the game of golf, Arison worked for several years with The First Tee of Akron, an organization that teaches underprivileged youth the values and life skills that are gained through the sport of golf. He has also served as an assistant caddie master and club house attendant at Portage Country Club.

Arison competed collegiately at Wagner College, an NCAA Division I member of the Northeast Conference located in New York. An All-Conference honoree, he served as team captain his junior and senior seasons.