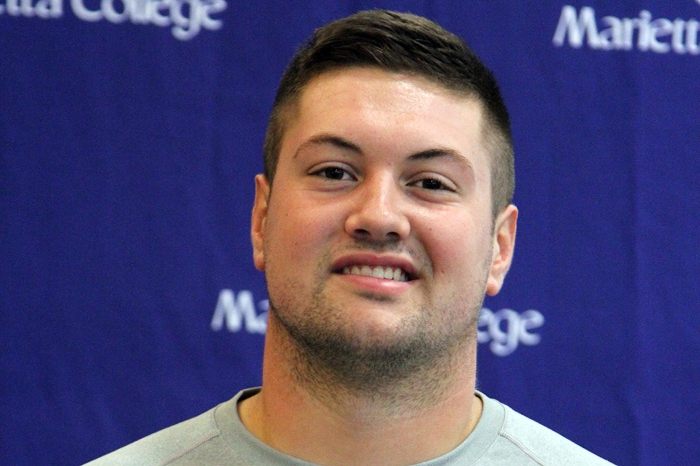 Growing up in Zanesville, Ohio, Alec Shook ’19 often heard family members talk about working in the oil and gas industry. His interest grew and when he learned about Marietta College’s Land and Energy Management program, he felt he found a career that checked all of the boxes.

“I wasn’t too much of a math and science guy, I was more business-minded,” he said. “It’s the type of job where you aren’t in the office all day, you get to meet with landowners and visit job sites.”

The Land and Energy Management program is a relatively new major at the College and Shook said he has enjoyed watching its progression and telling others about it as well. It became a major in 2014 and falls within Marietta College’s Department of Business and Economics.

The major provides a foundation for a career involving the fundamentals of land energy management including oil and gas leases, title searches and more. Students graduate with expertise in the acquisition of sub-surface exploration rights but also skills in negotiating leases and contracts, working as the liaison between energy companies and landowners and then maintaining the leases over time.

Recently Shook was honored when he was named one of four finalists for American Association of Professional Landmen Outstanding Graduate scholarship. Shook wasn’t ultimately chosen to receive the scholarship, but he said the nomination and interview process provided him and Marietta College with a unique opportunity.

“I was disappointed because I felt I could stand toe-to-toe with anyone, but I told myself that just getting to sit in a room with influential people in the energy industry was a great opportunity,” he said.

“There weren’t a lot of programs east of the Mississippi,” she said. “Every student we’ve had graduate who wanted a job has gotten a job and companies are taking notice.”

His leadership positions with the Marietta College’s AAPL chapter and his activity with the college’s Energy Business Alliance likely played a role in his getting the nomination, Shook said. He explained the alliance brings together students majoring in a variety of areas, such as petroleum engineering, geology, and land management to develop an entire drilling plan, from the well to the drill pad. He oversaw the land acquisition in the simulation.

“It showed I can work with other organizations,” he said. Shook has also completed internships in the energy industry and works with Marietta College’s Admission Office.

“He’s one of those students who is involved and an involved student does well,” Thomas said.

Shook will graduate in May and has accepted a full-time position with Dominion Energy in Akron.

“I really like going out and meeting landowners so I hope to focus on that, but I like the overall project management, too,” he said.

Building a relationship with landowners establishes a strong foundation for contracts that can last a lifetime.

“Once you sign a utility easement, they are forever and stay with that landowner as long as they own the property,” Shook said.