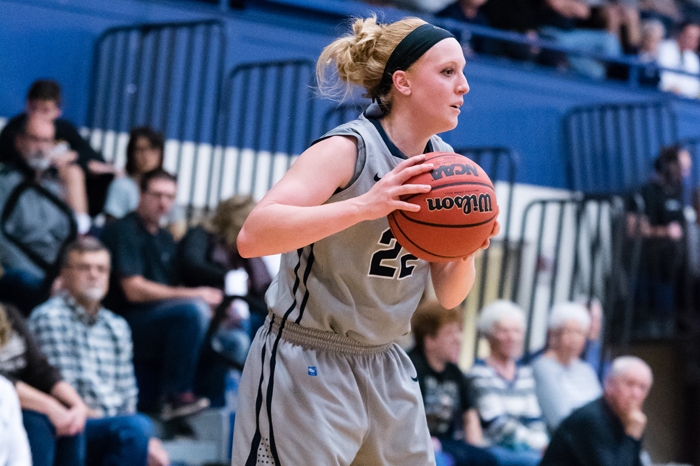 Marietta College senior women's basketball player Ashley Barker ’18 (Mogadore, Ohio/Mogadore) has been chosen to participate in the 16th annual "So You Want To Be A Coach" program offered by the Women's Basketball Coaches Association in a partnership with the Alliance of Women Coaches.

The three-day workshop with speakers provided by the Alliance will be held March 28-30 in conjunction with the WBCA Convention in Columbus, Ohio.

"This is going to be a great opportunity for Ashley," Marietta head coach Kole Vivian said. "She has always been a very smart player, and when she expressed interest in coaching in college, I thought this would be a great place to start. She applied and did an excellent job to be noticed by the WBCA and to be selected for this program."

Barker, who will graduate in May with a Bachelor of Science degree in Health Science, will join 60 other collegiate women's basketball players from all divisions for the three-day workshop. She is one of five chosen from Ohio schools joining Jay-Ann Bravo-Harriott (University of Toledo), LeTisha Caldwell (Cincinnati Christian University), Jordan Korinek (Kent State University) and Brooke Orcutt (Case Western Reserve University).

"Ashley has been a three-year captain for us, and even though she hasn't been able to get on the court this year because of an injury, she has been doing a great job keeping us connected and being a leader for the team," Vivian said. "Ashley has the work ethic, passion, and dedication to be an excellent basketball coach."

The objectives of the "So" program are to increase the understanding and application of skills necessary to secure coaching positions in women's basketball, increase the understanding and awareness of competencies necessary for success in coaching, introduce female basketball players to coaches and administrators, and raise awareness of the existing talent pool of female basketball players who have a passion and interest in coaching the game of women's basketball.

" 'So You Want To Be A Coach' is the longest-running education program the WBCA offers, and it remains as popular with member coaches and student-athletes today as it was when it began 15 years ago," said WBCA Executive Director Danielle Donehew. " 'So' is the entry point for women's basketball players who want to coach. Because of their participation in it, more than 400 former college women's basketball players are currently working as coaches or in some role in our sport. Our new partnership with the Alliance will enable us to make this already successful program even better."

"The WBCA has set the bar high for the 'So' program," said Megan Kahn, executive director of the Alliance of Women Coaches. "Joining in partnership, the Alliance is excited to help pave a way for these student-athletes to continue to be involved in the game of basketball. We look forward to welcoming, educating and inspiring these aspiring coaches."

"So" participants are provided with professional development and career networking opportunities. They will learn about the administrative side of coaching, recruiting, how to get hired, skill development, the importance of knowing the rules, and how to balance work and life.

Qualified candidates are selected from a list of nominees who have exhausted their final year of basketball eligibility at a four-year institution or have graduated within the past year. The candidate's head coach must nominate them and be an active WBCA member. Each participant is picked based on her academics, contributions to women's basketball on and off the court, professional resume and a written recommendation from their head coach.