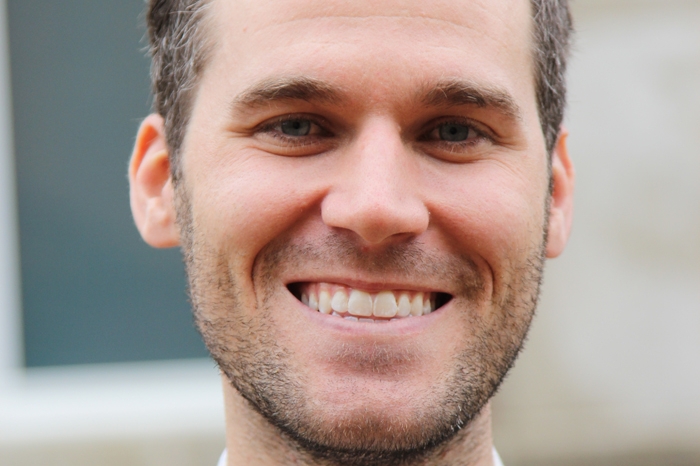 Bryn Perkey ’13 had a simple goal when he returned to campus recently — say something that relates to today’s students.

“I remember having alumni or a more senior executive speak at a class, and I could tell it was difficult sometimes for them to connect with a younger generation,” Perkey said. “I was excited to come back and speak with students at Marietta because I feel like I’m not too far removed from their experience now.”

Perkey, a senior consultant with Capgemini, was a Visiting Executive in late February and he spoke with students in two Leadership classes and another Computer Science class. He said it seemed a bit odd only to be five years removed from sitting in those same classes, and now he was the featured speaker.

“I love meeting the students,” he said. “It’s important that they see graduates like me and can see what the result of a Marietta College degree can mean.”

Dr. Gama Perruci, Dean of the McDonough Center for Leadership & Business, said the timing was just right to have Perkey back on campus.

“Bryn has quickly established himself as a thoughtful leader in the business world,” Perruci said. “He has developed an extensive knowledge of global leadership through his many trips to Asia. He really connected with the students during his campus visit. They seemed genuinely excited to learn from his experiences.”

Ashley Olszewski ’20 (Elyria, Ohio), who is majoring in Biochemistry, said she enjoys attending guest speaker events, but is just now starting to see the value in them.

“Before meeting him, I hadn’t considered whether or not I wanted to travel for my first job once I was out of school. But after hearing everything he had to say and the way he described the different cultures, it is definitely something I would like to do in the future,” she said. “I really enjoy these types of visits whether they are through McDonough or anywhere else on campus because they not only give me a vision for the future, but help me market myself better to future employers and internship applications.”

The McDonough Leadership Program has multiple ways it brings speakers to campus to interact with students, including the Visiting Executive Program.

“We always enjoy bringing back our McDonough graduates and getting them to spend time with current McDonough Scholars. For the graduates, it is a way to give back in a meaningful way. For the students, it is a powerful way to network and expand their knowledge of leadership,” Perruci said. “We are so appreciative of the gift we received from Barbara ’73 and Paul Fitzgerald, which created the endowment that supports the Visiting Executive Program at McDonough. Through their generosity, we are able to connect our students with accomplished leaders who get to share their knowledge and experiences.”

It was the Fitzgerald Executive-in-Residence Program that resonated with Perkey. During his junior year, Perkey was part of a team that undertook an engagement project for Peoples Bank in Marietta.

“That experience opened me up to what consulting is,” said Perkey, who graduated from Tyler Consolidated High School in nearby Middlebourne, West Virginia.

The EIR that year was Dale Wartluft ’63, who became a mentor to Perkey.

“He was really able to relate to us,” Perkey said. “For all of us to get an opportunity to work on a project like that with someone who has Dale’s experience was just amazing. I was majoring in Information Systems and had a minor in Asian Studies and didn’t even consider a career in consulting. Then Dale told me I had a knack for it and that I’d be great at consulting.”

Wartluft, who is a Trustee Emeritus at Marietta College, enjoyed a distinguished career with Ernst & Young, which was eventually purchased by Capgemini. He still had connections and recommended Perkey for a job with Capgemini.

Perkey joined Capgemini immediately after graduating and has moved up the ranks. While he never lacked for confidence, Perkey believes companies like Capgemini really appreciate the value a liberal-arts educated student brings to the table.

“I remember during my on-boarding when other new hires would introduce themselves and say, ‘MBA from Cornell,’ or ‘MBA from Columbia,’ ” Perkey said. “When they got to me and I said a BS from Marietta College, there were some people in the room looking around like, ‘Who?’ Coming from a smaller school was more of a hidden advantage at the time, even to myself, but now it’s not a secret that companies want to hire more graduates from liberal arts schools like Marietta.”

Perkey, who has been living in Washington, D.C., for seven months, believes he knows why.

“Because there is nowhere to hide in your classes at Marietta,” Perkey said. “When you showed up for a class, you had to know your stuff; and when you were called on by the professor, you had to step up and contribute to the conversation. Now it just feels natural to be in that environment when I’m working with my team, a client or making a presentation to some partners. At Marietta, everyone is being prepared to step up … you just don't know it at the time.”

That message resonated with the students he met.

“I feel that in college we are so caught up [with] grades and school that we don’t actually get a feel for what the working world is like, and these visits offer the insight that we would otherwise be missing,” Olszewski said. “Bryn spoke to us about what his company looks for in new hires and even interns; he talked specifically about honing in on our liberal arts education because it makes us more diverse to employers, and therefore [makes] us stand out in a good way.”