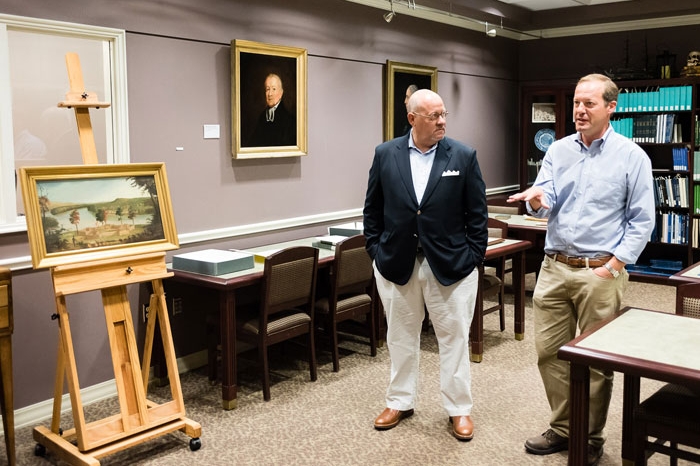 When Ben Wilton visited Marietta College’s Legacy Library in 2013 to donate a manuscript by Northwest Territory pioneer Samuel Prescott Hildreth, he was impressed with everything he saw that day.

“Marietta College has a wonderful library,” said Ben, who lives in Buffalo, New York. “It’s why I knew this was the right place to donate these paintings. This is where they belong.”

Ben and his brother, Frank, recently donated two oil paintings depicting Fort Harmar and Campus Martius from the 1830s. The paintings are being appraised, but Director of the Library Douglas Anderson believes they both have significant historical and financial value. Anderson said neither of the paintings are signed, but they are believed to have been painted by early Ohio artists Charles Sullivan and/or Sala Bosworth.

“I'm delighted that the Legacy Library will have a role in preserving these historic paintings and making them available to historians and researchers here at the College and in the Marietta community,” Anderson said. “It is particularly gratifying that they have been returned to this area after so many years.”

The paintings had belonged to their father, Frank Putnam Wilton, and had been in the family for several generations. The Wiltons are descendants of Gen. Israel Putnam (of Revolutionary War fame), through Douglas Putnam who married Mary Ann Hildreth (daughter of Dr. Samuel P. Hildreth) and was a founding trustee and secretary of the board of Marietta College.

Frank Putnam Wilton passed away on Aug. 26, 2016, and the paintings were left to the brothers.

“It was dad’s wishes that they come back here,” said his son, Frank. “We inherited them, but we knew this is where they belonged. We know they will be taken care of and utilized here.”

Marietta College’s Special Collections houses many significant historical documents, including photos, books and paintings. Anderson said the addition of these two paintings will increase the historical significance of what is already available for researchers from this time period of the Northwest Territory.

“The quality of materials we have on the early days of this part of the nation are a major reason why researchers come to Marietta all of the time,” Anderson said. “Most notably, Pulitzer Prize-winning author David McCullough, who has been visiting our Special Collections to do research on his next book.”